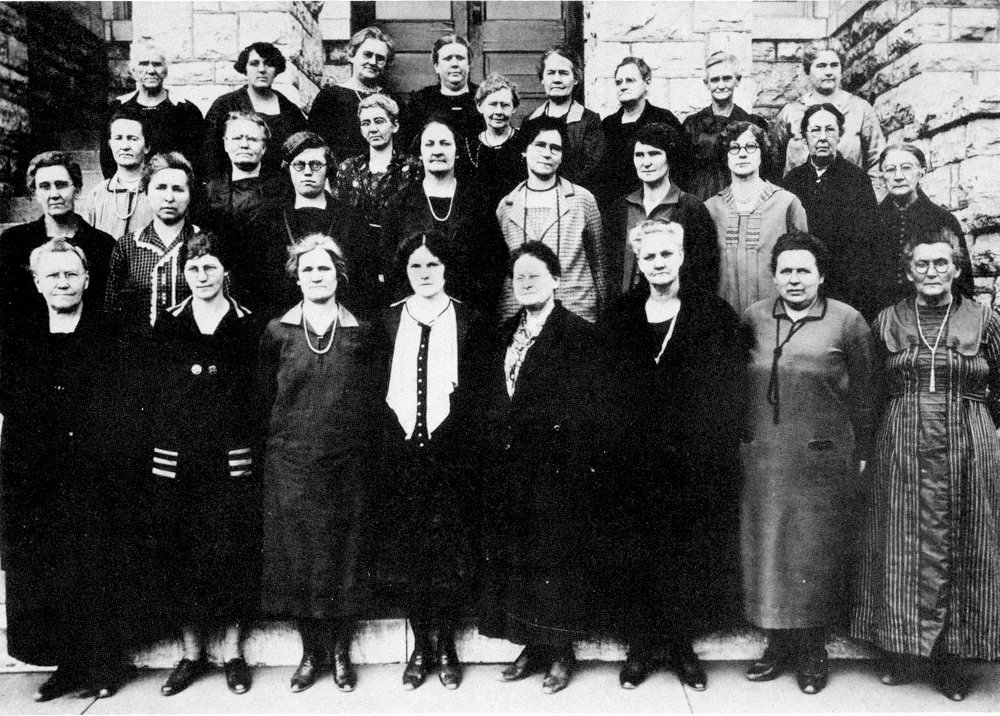 The Cane Creek Homemakers as they appeared in 1921. Submitted photo

(The following items were taken from the Southeast Missourian and the Missouri Cash-Book.)

April 1: “Richard Behrens, Ford Groves salesman, went to Ironton to bring back four Ford cars from the dealer there. He stated it was hard to get new cars from the factory. More cars were sold in March than ever sold till now in the auto business.”

April 2: “The county court hears citizens about locating a new state highway from Jackson to Dutchtown and on to Stoddard County, north of Advance.”

“Ben Eggers is given a military funeral for his death during the Battle of Argonne, Nov. 4, 1918. McCombs will receive the remains. The funeral will be at New McKendree Methodist Church. The American Legion is in charge.”

April 3: ”The golf season opened at the Cape Girardeau Country Club. It was inaugurated Sunday on the temporary greens and tees in place. A dozen and more organized the club with now 105 members. The first full nine holes were played by Fred A. Groves and Charles W. Boutin, scores 68-73. Groves made the better shots staying out of the rough. Both strayed from the  straight and narrow. Rob Lamkin and Norman Hely played in the  afternoon, but kept no score. The opening day players were George Steck, Miss Mary Griffith, Bob Beckman, Walter Albert, W.F. Bergmann, Charles Black, Sam Sherman, George Bolz, and Charles Himmelberger. Bogey for the course is set for 40, announced Fred Groves. The permanent greens will be installed later as well as the Club House construction, which will start soon.”

“Robert Henderson has returned from a trip to Florida.”

“J.T. McDonald was re-elected the County Superintendent of Schools. W.A. Heyde and W.H. Wagner were re-elected to the school board.”

“John Fulbright died last Saturday night and was buried in the Fairmount Cemetery. He was a blind veteran of the Civil War for years. Very patriotic, he carried Old Glory in many parades.”

“D.L. Burford is now proprietor of the Central Hotel.”

“Young man Schoen purchased $8,000 worth of fur in Dunklin County during the past winter.”

“Wallace and Co., nurserymen, have been delivering a lot of fruit trees to Jackson and county during the last week.”

“Mr. W.H. Miller and Mr. Ed Robb returned home from Columbia, where they have graduated and are full-fledged limbs of the law.”

“Charles H. Macke is always up to labor-saving machinery. His latest is a little ripsaw which runs on a belt. It saves time and labor.

“Mr. Mason, Jackson attorney, delivered the address to the senior class of Jackson Thursday morning. It was titled The Ideals of Citizenship and gave the graduates a lot to consider.”

“The Annual meeting of he Cemetery Association met at the home of Mrs. E.G. Sibley. They closed the years business and made plans for the coming year. They will be collecting yearly dues. Those collectors in the wards are Mrs. H.H. Mueller Jr., Ward 1; Mrs. Lena Boss, Ward 2; Miss Sophia Schneider ,Ward 3; Miss Lillian Kneibert, Ward 4 and Miss Clara Mueller will notify the non-residents. It was announced Jim Randol, sexton over the years, will keep the grass mowed, but cannot dig any more graves; therefore, the city needs a new grave digger.”

“The Business Women’s Club gave a dance at the Armory Hall Thursday evening with 200 responding to the invitations. Music was provided by Mrs. Virginia Kin-der, Lee Morris Hoffmeister and Sam Lail.”

“Young Alvin Ueleke, son of the jeweler, has been experimenting with the radio telephone over the last years. He will receive the weather forecast at 10 each night and transmit it through our local  observer, John Putz.”

April 14: “Brown Clippard, a most prominent farmer of the Oak Ridge vicinity, went before the Federal Judge C.B. Farris at Cape Tuesday and pleaded bankruptcy claiming the manipulation of Wash Miller now serving in the penitentiary sentence for embezzlement and Minton Thompson Motor Co.’s failure, caused his financial crash. His liabilities are $84,187.54; Assets $50,969.50.”

“John Vaughn Priest, entertained friends Tuesday night at the home of his parents, Mr. and Mrs. J.V. Priest. A fine dinner was served to 11 guests by his mother.”

“Members of the graduating class will attend the play, The Importance of Being Earnest given by the cast of characters from the Teacher’s College on April 25. A Special  section of the Gem Theatre will be set aside for the graduates and faculty decorated in the school colors.”

“The Music Department of J.H.S. will present the operetta, The Merry Milkmaid on April 15, 8 p.m. in the auditorium. Adults 50 cents, School Children 25 cents.”

“Dr. Joe H. Howard, dentist over the Cape County Savings Bank will be in Oak Ridge on Tuesday.”

“Dr. C.W. Kinsey” Osteopathic Physician and Surgeon, will be in Jackson on Tuesday and Friday afternoon beginning April 1. His office is over the Jackson Auto Co. in the Milde Building.”

Ad: “At Obermiller’s Greenhouse, pick up your tomato, cabbage, pepper and eggplants.”

“Harlan Short is one of the victims of a mild case of scarlet fever.”

“Cane Creek Homemakers met with Mrs. Pearl Gladish with 21 members and 13 visitors. The program was on “Housecleaning” and included discussions. A splendid luncheon was served by the hostess. The next month will be with Mrs. Jake Brennecke. The homemakers attended a surprise 50th birthday for Mr. Linder Miller given by Mrs. Miller, with 75 in attendance.”

Ad: “A dead shot on Potato Bugs….Kills them all” Sherman Haupt.

“Announcement by The Ideal Grocery Co. It has opened with G.A. Morton, manager by the stockholders of the Bynn Yann Store Co.”

“Suggestions received by readers on how to make Jackson more beautiful are as follows: