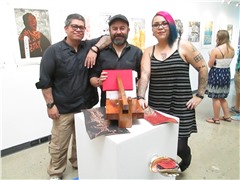 “Convergentes,” a recent exhibition at Catapult Creative House in Cape Girardeau, brought visiting artists from Mexico, Alejandra Mares, Xavier Moreno and Juan Jose Huerta, together with the southeast Missouri community for a little over a month.

“The exhibition is about an exchange of ideas, techniques and technologies,” said Moreno at the September First Friday artist talk held at Catapult Creative House. Students and members of the community attended the slideshow and talk, with artist’s prints awarded at the conclusion.

The artists hosted August and September’s Downtown Cape Girardeau First Friday events, a regular gathering of art enthusiasts, supporters and artists, held once monthly. Convergentes featured one of a kind prints by Alejandra Mares, Xavier Moreno and Juan Jose Huerta and a collaborative ceramic wall that was created during their stay.

It was not the first time Mares had visited Cape Girardeau, but it was her first encounter with summer in southeast Missouri. Two years prior she visited for a holiday in the winter months. Home to the artists is 1,600 miles away in Leon, Mexico, where average temperatures between May and September ranges from 68 to 86 degrees Fahrenheit.
“This weather is not my favorite,” said Moreno, despite the low humidity in past months.

Mares entered the University of Guadalajara, Mexico, in 2005, where she majored in Art with a specialization in painting. Her interest in performance and body expression led to employment as an alternative model for students at the university. From her hot pink and teal blue locks to her various piercings and tattoos, Mares considers herself a walking piece of art.

Currently she is employed in Mexico as a full-time artist, producing drawings, paintings and prints.

The prevalent trademark image Mares identifies with and reflects in her prints is a realistic heart— the muscular organ—complete with arteries, in a three dimensional image.

Mares explained that the heart represents her, but her love for making art ties in too since it is part of her identity. In Matriarchy II, the heart, placed dead center, occupies a very large part of the work’s space. She explained other elements of the design, saying, “Coffee and bread are basic breakfast; the doily, from home, represents childhood.” Visual journeys of Mares’ life come across in the artist’s work.

In mid-August an event combining food and art was held at Don Carlos Restaurant at West Park Mall, Cape Girardeau. The artists printed on tacos to produce edible art, aimed at sharing their culture with the community.

Vickie Bollinger, a Southeast Missouri State University art student and Jackson native, said she had seen the visiting artists several times and gleaned a printmaking technique during the time she spent with them. The technique requires gluing aluminum foil onto cardstock and pressing into the aluminum foil like embossing.

“I try things all the time. I’ve made lots of things out of trash,” said Bollinger, while standing beside her studio desk at Catapult Creative House. Lined up at the top of it, animal’s faces seem to jump out of the rocks she’s painted.

The Mexican artists seem to have a similar association with their natural surroundings. Some of their art is printed on paper made from cacti. “It is like manna, the food of humanity” said Moreno. “For us, cactus gives us fiber, thread, paper, all kinds of food—from desserts to salty foods.”

Mares added, “In Mexico we have it with everything.”

The town of Leon is known as the shoe capitol of Mexico, said Moreno. “We have a wide range of quality.” Strong ties to his community are evident in Moreno’s, The Shoemaker, a scarlet and black print that portrays a serious expression of a dedicated shoemaker handling scraps of leather used to make leather goods. “The viewer moves across the composition like he’s out there working it,” said Moreno.

Moreno started out delivering newspapers at 4 a.m. on his bicycle and after studying graphic design at the University of Leon, Mexico, he was invited to work as a graphic designer at a local newspaper. Later he was accepted into the art program at the University of Guadalajara, Mexico, where he majored in visual arts with a specialization in painting. At this time, he is employed as quality president at Infographicworld, an infographic agency that provides visual services in New York City.

Currently Huerta works for the Mexican Census Bureau in the statistics area. “That’s the reason why some themes in my artwork analyze the population problems: migration, gender equality…Every one of my pieces tells a story,” he said.

Huerta explained that He Was the First Hopeless Martyr depicts a man screaming, who is surrounded by chaos. Despite the title, Huerta said, “With all the problems he has, there is a little bit of hope left.”

Huerta’s advice to students was to “Use the resources you have at the University and listen to your teachers (Josh Newth, Hannah Sanders, Joni Hand).”

Comprised of 47 ceramic pieces, the work took about two weeks to complete. It was Mares’ first time working in clay.
“We had a lot of fun, we found a master technician. The real treasure was the collaboration between Benji and us. We may not be the best of the best but it charged a lot of spirit,” said Mares.

Huerta, unable to participate in collaborative ceramics, enjoyed interacting with the community at the other events.

He said, “To visit Cape Girardeau for me was a wonderful experience. I knew about its history, the interesting architecture, all of those old buildings and the antique shops that show part of the history, and the magical river. One situation captured my attention—how the university helps to (support) the cultural life in Cape. There’s a lot of artistic activities where you can see teachers and students of SEMO. I think that’s very important to Cape.”

Moreno shared his thoughts with students as well, “The artist is someone who is very sensitive to his surroundings. It’s a big deal. It’s not easy. It takes a lot of discipline.”