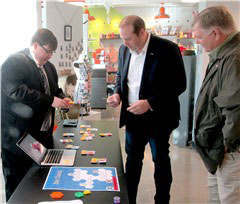 Leah Powers, operations manager at Catapult Creative House quickly called on students and staff to be ready Saturday, Nov. 9, for a pop-up tour by U.S. Rep. Jason Smith after receiving a call late Wednesday from his office. Powers moved forward with plans to provide Smith with a close-up view of the student learning lab at CCH, known for cultivating creativity, innovation and entrepreneurship.

As part of the program, the students met after school once a week for two months with Powers to explore entrepreneurship issues, learn how to develop and operate a business, and use the vast resources available at Catapult Creative House.

Bee Chainz are hexagon-shaped key chains made from a 3D printer that interlock like a puzzle using connectors on one of their six sides. A variety of colors and imprints are available. Up to 25 pieces can be connected, said Van Den Bossche.

Van Den Bossche is studying banking and finance at Jackson High School as well as marketing at the Cape Girardeau Career and Technology Center.

“Devin is our finance guy,” said Powers. “Bee Chainz had to develop marketing and packaging for this project. The group met weekly since September for two hours. They went heavy with it.”

Van Den Bossche explained that part of the reason the group went with the company name Bee Chainz is that, “Bees are really important to the whole world.”

The students decided to donate 10 percent of their profits to the Missouri Conservation Heritage Foundation.

Smith asked, “Who came up with that idea?”

Van Den Bossche replied, “We were all in agreement.”

Smith said, “Great. What are your plans for the future?”

Van Den Bossche replied, “To go to SEMO for financial planning. The last sale date for Bee Chainz is Nov. 30. If it does decently, we’ll continue.”

Smith said, “Lots of big businesses came out of Cape.”

In the entrepreneurial spirit, Smith gave Van Den Bossche a congressional coin from his office.

Jada Goodman, a Southeast Missouri State University hospitality major spoke with Smith at the Catapult Creative House café, otherwise known as Fuel. She talked with him about Hawk Sauce— a hot sauce complete with a Redhawk label and made from bold peppers with a bite — that was developed by Southeast Missouri State University hospitality management students.

Smith was very interested in not just the hot sauce, but Goodman’s baked goods she sells at CCH, the Cape Girardeau farmer’s market and the riverfront market. The name of her business is Danielle’s Doughy Delights.
Smith viewed artwork at Catapult Gallery and custom printing at Catapult Press; fashionable merchandise was also on display at CCH lower level. The upper level spaces including the studio, multimedia lab, classrooms, computing stations and Catapult Interiors were also part of the tour.

Printing blocks and presses at Catapult Press are maintained by associate professor of printmaking Hannah Sanders and her students. She showed Smith some of the finished printed pieces.

“Gary Rust lets us use the equipment, and although custom printing costs a little more, the profits go back to the students,” said Sanders. “Every first Friday we have live printing here.”