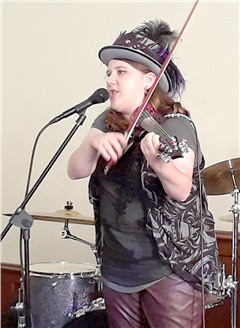 Lydia Gentry, also known as Dragoness, opened for two bands at the Student Baptist Center Monday, June 10. Equipped with a six-string electric violin, a recording device controlled by foot pedals and her captivating voice, attentive viewers witnessed looping, a technique used to layer and record the music which enables a solo artist to provide rich, full sound on the spot. This solo performance by a classically trained violinist was no ordinary performance.

Gentry said many have described her style and voice as a mix of Florence + the Machine, U2, Rush, Patti Smith and Janis Joplin. Sounds of psychedelic rock, indie alternative, and Americana are familiar genres you may detect when listening.

In an effort to kick off a new all-ages music venue at the Student Baptist Center, now known as The Chapel, this Monday night performance resonated with energy and talent. Held in the SBC sanctuary with stained glass Jesus for a backdrop, the walls and windows shook with dynamic sound as the musicians poured out powerful music.

Bruce Gentry, SBC director, supports the idea of the SBC’s transformation to The Chapel.

“We have a small chapel with great acoustics that is just a great place for music. I actually had this idea while touring the Ryman Auditorium in Nashville, TN. The Ryman has a really interesting religious history that began decades before it started hosting the Grand Ole Opry during the 1940s. There are few music venues in Cape that host an audience under 21 years of age, so we feel that promoting our space as a music venue is one way to serve our community and the campus community in particular,” he said.

The two bands Dragoness opened for are musicians she knows from Nashville, TN, where she attends Belmont University. They were Quinn O’Donnell and Jungle Tooth. Both bands were on their very first tour.

O’Donnell, a 19-year-old alternative musician from Nashville, TN, is a student at Belmont University. She has been singing since she first began to speak. Her parents are also musicians. “In Nashville, more people are musicians than not,” said O’Donnell.

Jungle Tooth, a five-piece alternative rock band from Nashville, TN, is lead musically by Adam Riekstins who plays the role of singer, guitarist, writer and producer of the group. Riekstins is backed by his best friends, Nate Dooley (drums), Will Cheat-ham (guitar), Joey Corso (bass) and Jaxon Cannon (keyboard).

Bruce Gentry said the BSC had hosted a few concerts in the past but usually on the terraces.  “We hosted an open mic night for students last semester which we felt was successful. We are planning an open mic night during the first week of the fall semester as well as a karaoke night to welcome students.  We also have a concert planned for early September,” said Gentry.

The Baptist Student Center on Southeast Missouri State University Campus is located on Normal Avenue, the same block as Kent Library and across from the Grauel building. It has always been a nurturing place for students. Founded in 1939, many generations have enjoyed weekly Bible studies and chapel services plus a couple of free meals a week.

Lydia Gentry has lived in Cape Girardeau since she was 3. To her, the SBC is familiar ground. “I grew up around this. It’s kind of like a hospitality group,” she said.

Lydia performed four covers and an original song, “Downfall.” She opened with “Subdivisions” by Rush.

She now fronts her new band, Gentry, while also performing solo in Missouri. The release of their debut single “Downfall” will be later this summer. It was recorded this spring.

Visit https://www.violindragoness.com, www.gentryband.com and www.facebook.com/search/top/?q=the%20student%20baptist%20center for more information. A video of the performance can be found on The Cash-Book Journal’s Facebook page.
In this article: