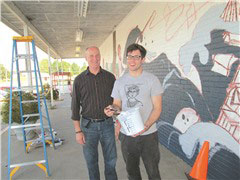 While Jackson Riverside Regional Library patrons walk around the bright yellow caution tape to approach the entrance, they stop to chat with Terry Davis, mural artist. Some have questions; others just want to remark on what a good job he’s doing. Right now Davis, a Southeast Missouri State University BFA graduate is a local celebrity.

“At first people thought it was graffiti. Most people talk about how visible it is from the road. All of the comments have been very positive. I think people are just excited to see something like this in Jackson, as opposed to Cape,” he said.

The new graduate began working on the 11-by-75 foot mural shortly after graduation. “My personal deadline is mid-July,” said Davis. Davis’ friend, Candace Taylor, a Southeast Missouri State University art student, is helping him paint it.

A space as long and large as it is can make composition difficult.

“I was thinking about an extended rectangle with a narrative that describes the visual movement of space,” said Davis.

The brick surface has been painted over a few times, which is helpful. Typically a brick surface is a challenge because of the recesses. It’s hard to predict where the recesses fall, but when they’re in an area where an important detail lies, it gets tricky.

Jeff Trinkle, library director, said, “We wanted the mural to match the outside to the inside. We have such good service and programs, but a less than eye catching facade. We talked about parameters. We knew we wanted it different than murals down on the river. From there he (Davis) took over with this design.”

The mural’s theme to promote the library and the community is executed in scenes that read like a book, from left to right.

Davis’ days are divided between the mural and a sculpture project for the City of Cape Girardeau’s Fountain Street Roundabout, created by Chris Wubbena, a Southeast Missouri State University professor, who teaches all levels of sculpture.

The first visual image starts out with a boy on a bike set in a wooded area, a familiar Jackson scene. He acquaints you with the community and kick starts the visual narrative which begins with a little girl reading a book.

The little girl with braids is deep in thought reflecting on the memories of her town which soon segue into a story of her own, invented by her imagination.

Viewers will pick out Jackson’s beloved Courthouse right away. It is set apart from the surrounding dynamics and links your eye to its familiar shape very quickly. The adjacent building scape will represent the current uptown Jackson buildings but not be recognizably specific in detail, said Davis.

City Park scenes include Hubble Creek and its handy steps built into the floodwall that make creek exploring accessible for all ages.

Trinkle said, “Everybody will read their own story into it. It’s all about education and art, a great form of education.”

The idea for a mural began in 2016 when talk between board members and the library director became ideas that led to contacting the Southeast Missouri State University art department.

Trinkle said, “Steve Burk, president of the library board of trustees, travels to other cities and had seen their murals. A Friend of the Library, Barb Morgan, knew Wubbena and we asked if he could recommend someone.”

Wubbena said, “He (Davis) was the first person I thought of because he is a solid artist who has a great work ethic. I knew he could produce an amazing proposal and deliver. He has been a really successful student who deserves this opportunity, he’s earned it.”

Davis explained that the main idea is to get viewers involved in the space and ultimately lead you inside to the books and other resources that provide entertainment, information and access to technology.

With that plan it is no surprise then that Hubble Creek transitions to a raging ocean, setting the stage for adventure and expanding on imagination. As the boy in the boat casts his line, it intertwines with the flying book pages. The young fisherman enjoys his sport while having an opportunity to hook a bookshelf, and perhaps a book. The visual ends there.

The mural employs the natural and the unnatural to convey the idea of the little girl’s dream state, when images and ideas may not line up with reality.

“The scale of the objects play into the dream state. That’s why she is so huge,” said Davis.

“He’s done an exceptional job with the time he’s been at it,” said Trinkle.

Have a mural you want painted? Contact Davis at davisterry64@gmail.com.