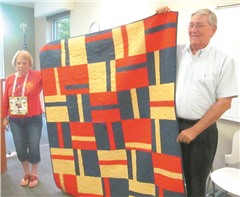 It was 45 years ago that Robert Wills took shrapnel in his liver while serving in Vietnam. “We’d been there all day and walked only about a mile-and-a-half. The area was booby trapped but it wasn’t till around four o’clock it was tripped.

“About five years ago I was getting a physical at the doctor and he noticed the scar. He asked if it was from the war and when I said, ‘Yes,’ he thanked me for serving.” It was the first time Wills had been thanked for serving in Vietnam.

Just recently he and four other veterans from various wars received Quilts of Valor at the River Heritage Quilt Guild July meeting.

Kevin Huffman, a.k.a. Kevin the Quilter, coordinated the project. He described the quilts as tangible objects that say ‘thanks.’

Wills said he was shocked to find out he was receiving a quilt. “I don’t know what to say. It almost makes me want to start quilting.”

Huffman explained that the Quilts of Valor national organization started out in 2003 by making covers for combat wounded soldiers who served in the War on Terror.

“Now it’s for anyone,” said Huffman.

The mission of the Quilts of Valor Foundation is to cover service members and veterans touched by war with comforting and healing quilts.

By blogging, Huffman of Winfield recruited quilters from all over the country to make blocks for the project. “I expected maybe two or three hundred — I got 5,681—enough for 189 quilts.”

Chris Ludwig, RHQG president, said the Quilts of Valor project was requested by members who were also interested in having a male quilter come and present a program.

Ludwig knew someone that fit the bill. She and Huffman had met two years prior at The Golden Needle in Cape Girardeau, where she and other quilt guild members work part-time. They met when Huffman visited the quilt shop with his mother. He was looking for fabric.

Huffman said, “I told my mom to act like this is your quilt block.”  He was just stepping out into quilting as an adult and felt the stigma associated with the art form where gender was concerned.

“Those ladies were very welcoming,” said Huffman. With encouragement from them he entered his ‘Autumnal Colors’ Dresden plate quilt and won third place at the 2010 RHQG show.

The Dresden plate template he used was an old cardboard one his grandma used.

“Me Maw was always quilting and crafting,” said Huffman. “She let me and sis help. I think that’s what ignited the fire (to quilt) in me.” They made their own quilts, using Liquid Embroidery paints to color the paper blocks first.

“I came from a family that loved sewing. “ His aunts made quilts and his mom made the children’s clothing. Huffman made a quilts and quilt projects for gifts to family members but it wasn’t until 2010 when he stumbled upon his grandmother’s old Sparta sewing machine that he took up quilting.

“I wasn’t without trepidations that I began going to quilt shops because it’s always referenced as a women’s art,”  he said. “Quilting is not a girl or a guy thing; it’s an art form,” he said.

Christmas quilts for family members really launched him into the hobby full swing.  “I didn’t think you could make something so cool by cutting it up and putting it back together!”

Huffman is big on using scraps and organizes them in his studio by size and color. He practices efficiency with materials and time. Quilt ends make quick ‘Lasagna Quilts’ and down time as a flight attendant is turned into quilt making with the aid of his Singer Featherweight machine.

“You can bring it on the plane and scissors, too, if they’re under four inches,” said Huffman.

Huffman finds lots of reasons for making quilts. Inspiration may come from honoring brave veterans, a bag of scraps, a decision to tie the knot or a special couple — his parents—celebrating five decades of marriage.

Whatever the reason, Huffman always does research on the Internet to get ideas. Some of his favorite quilters include Eleanor Burns, Kathy Doughty, Bonnie Hunter, Victoria Findlay Wolfe and Ann McNew.

A collaborative effort between him and McNew resulted in a moving quilt named ‘Radar,’ shown at the meeting. It placed first in Tools of the Trade at the Machine Quilters Showcase in Wichita, KS.

‘Radar,’ started out with a box of fabric McNew gave to Huffman.

“I don’t do these colors,” said Huffman, explaining his first reaction. “Ann said, ‘Just have at it,’”  but Huffman was not inspired.

“We were flying over the Oklahoma tornado last year and the captain said we were gonna divert,” said Huffman. In the aftermath, Huffman said he was feeling kind of melancholy and wondered what he could do to commemorate the tornado that killed 24 people. He looked up the radar image and “everything started coming together smoothly,” he said.

The quilt top was made by Huffman and quilted by McNew. Altogether, there are 2,500 squares.

“It was done by pantograph, (an instrument for copying on a predetermined scale)” said Huffman.

Huffman urged the quilters to go home and look at their scraps in a different way just as he did with ‘Radar.’ Instructions for the Quilts of Valor were available at the meeting.

“Make it bright and cheery for a veteran,” said Huffman.