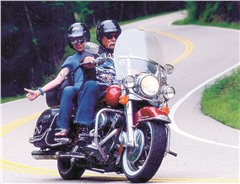 When Jerry Lacy of Pocahontas retired from Southwestern Bell Telephone in 1999, he created a bucket list of things he wanted to do. He has accomplished most of those things — he canoed the Mississippi River from St. Louis to Cape Girardeau, he bungee jumped and he went parasailing. He has yet to parachute from an airplane.

One project has taken him years to complete, and he hopes to check it off his list next summer.

“I got a wild hair to visit all 49 states I can get to on a bike [motorcycle],” he said. “I have two more states — New Jersey and Delaware. I’ll do them next summer.”

Lacy has also made it a goal to ride to all 10 Canadian provinces — and he has been to nine so far. (He tried going to Nova Scotia in 2010 but he had to wait six days for a ferry and decided not to wait that long.)

Lacy has been riding motorcycles since 1964. He currently owns four of them. In 1999, when he retired, he bought himself a retirement gift — a brand new red Harley Davidson Road King. He uses it to make his cross-country trips.
Lacy’s first trip was with a friend in May 2001, when he visited his son who was stationed in Almagordo, NM. That trip was 2,498 miles long.

He has taken eight trips in all, visiting all four corners of the continental U.S. (Maine, Florida, Alaska and California), racking up a total of 35,568 miles. On three trips he traveled with friends, one was with his granddaughter, and four of them he made by himself.

When he travels alone, he usually makes use of his conceal-and-carry permit and brings a gun along. But he has never felt unsafe on any of his rides. While some people he met were more friendly than others (Canadians are especially friendly, he says), he never felt threatened by strangers he encountered.

Most campers are friendly. “I’ve met some of the nicest people at campgrounds,” he said. At one campground, a man, wife and young daughter invited him to have dinner with them. When he prepared to leave the next morning, the little girl came over to him and gave him a hug.

Lacy usually camps at night in a small tent he brings with him. (If it happens to be raining hard, he won’t set up his tent; he finds a motel instead.)

He brings with him a small propane tank and burner. “I cook breakfast and dinner at the camp site,” he said.
He’ll usually eat lunch in a restaurant. “I stop in small towns and eat in their diners,” he said. “I don’t like the big city. I go around cities.” He also avoids the interstates and sticks to two-lane highways, where he sees more scenery. He rides until 4:30, when he begins looking for a campground to spend the night. “I try to average 400 miles a day,” he said.

He feels safer staying in a campground than camping alongside the highway. If he doesn’t see any campground signs, he’ll ask a local person where the nearest campground can be found.

On his most recent trip to Manitoba and Saskatchewan, Canada (Aug. 17-28), he drove 15 miles out of his way to see the world’s largest ball of twine in Cawker City, KS. Just before he entered Mani-toba, he stopped to see a giant turtle made from metal car wheels.

His fourth trip (July 14-Aug. 4, 2010) took him to Cape Breton, Canada. At a museum, he learned Alex-ander Graham Bell was from there. “I worked for the phone company for 33 years and never knew that,” he said.

On Prince Edward Island, Canada, he saw the house from Anne of Green Gables and a house made of glass bottles. The entire trip was 6,108 miles.

The next summer, he took his 14-year-old granddaughter Michaela Lacy with him to Key West, FL. In Key West, he saw Ernest Heming-way’s house. While visiting the Everglades, he took an airboat ride, and Michaela held an alligator. On their way back home, they rode the “Tail of the Dragon,” a stretch of highway in South Carolina and eastern Tennessee that has 318 curves in 11 miles.

On his third trip (July 9-Aug. 9, 2007), he traveled a total of 11,573 miles all alone to the Arctic Circle in northern Alaska. He loved the scenery as he drove up the Alaskan Highway, a two-lane road that was built during World War II. He stopped at Sign City where visitors post signs telling the distances to their homes.

The last 100 miles of the Alaskan Highway was gravel. When he reached the Arctic Circle, there was a campground there. But he heard there also were bears, and not wanting to meet any, he headed back to Fairbanks to camp. (When he travels to Canada he doesn’t carry his gun because it would be confiscated at border crossings.)

Heading south, he enjoyed the breathtaking scenery of Vancouver Island in British Columbia and then crossed the border into the State of Washington. He headed south along the coast into California until he came to Highway 50, a two-lane ribbon of asphalt that runs east-west across the U.S. A book about this highway, labels it “the loneliest highway.” Lacy agrees. “I’d go 50-60 miles and never see a car,” he said.

Vernal, UT, was a significant spot on this trip. Four years ago on his previous trip to National City, CA, (May 27-June 10, 2013), he was on his way home when he had his only motorcycle accident. A semi-trailer truck stopped in front of him. As he stopped on his motorcycle, a big dually pickup truck rear-ended him. On that trip, Lacy was pulling a camping trailer behind his motorcycle. It jackknifed and he ended up on the ground under his trailer. Utah did not require motorcyclists to wear helmets, so he wasn’t wearing one at the time. He suffered a fractured skull, a broken collar bone and three broken ribs. He was flown by helicopter to the University of Utah Medical Center. His wife met him there and drove him home. He was unable to finish his trip.

So on this trip, as he drove from that intersection (where the accident happened) to home, he considered it the last leg of both of these journeys.

“That was my only mishap,” he said. And he makes sure he wears a helmet every time he rides now.

He had mechanical problems just one time in all his travels. On this last trip, as he was driving through North Dakota on his way to Canada, he felt a burning sensation on the back of his leg. When he looked down, he noticed his pants leg was wet with gasoline. His fuel line was leaking.

He stopped at a truck stop and called the nearest motorcycle repair shop 70 miles away. It was a Saturday, and the shop was closing at 2 p.m., but if he could get there by then, they would help him. He made it in time, and the mechanic stayed an extra two hours to fix the problem.

Lacy doesn’t worry about things that could go wrong on these trips. “I’ve never had an inkling that anything can go wrong. I am just out having fun,” he explained.

He is cut off from most world news and the hustle and bustle of modern life when he travels. He does carry a cell phone and calls his wife every night.

Next summer, Lacy plans to visit the last two states and cross this item off his bucket list. The thought doesn’t really make him happy.

“It’s kind of sad,” he said, realizing these adventures are coming to an end. “I haven’t taken one yet that I didn’t enjoy.”