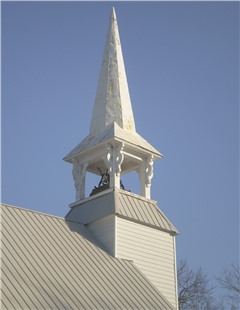 ‘Bells Across the Land: A Nation Remembers Appo-mattox,’ is an event that commemorates the end of the Civil War. Observed by the National Park Service and other organizations since April 9, 2011, Pleasant Hill Presbyterian Church in Fruitland will participate for the first time. The invitation to chime bells is open to all.

April 9, 1867 is historically significant because it was the day Union Gen. Ulysses S. Grant and Confederate Gen. Robert E. Lee met to set the terms of surrender of Lee’s Army of Northern Virginia. Commemorating the 150th anniversary of the Civil War supports the continuation of human rights today.

At Appomattox Court House National Historical Park, VA, chimes will set off a series of bell ringing beginning at 3 p.m., April 9 to remember the historical incident. The time of the ringing coincides with the end of the meeting between the confederate and union generals.

Pleasant Hill Presbyterian Church in Fruitland will join with other churches, temples, city halls, individuals, schools, historic sites and public buildings across the land by ringing their bells on April 9 at 3:15 p.m. for four continuous minutes. Each minute symbolizes a year the Civil War was in effect.

On Dec. 1, 1982, the Pleasant Hill congregation voted unanimously for the church to be dissolved. Members were transferred to the First Presbyterian Church in Jackson.

In addition to an Easter service at the Jackson church, the Rev. Grant Gillard performs an annual sunrise service at Pleasant Hill Presbyterian Church.

The Pleasant Hill Presbyterian Church is open occasionally for church and cemetery association functions and weddings. The church also participates regularly in the annual Christmas Country Church tour and other community events.

More information about the bell ringing event may be found at http://www.nps.gov/inde/learn/news/bells-across-the-land.htm.