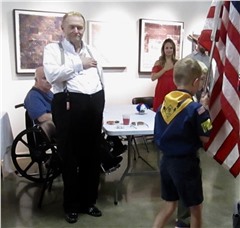 Janet Davis, representing Cub Scout Pack 212 of Jackson, was with her son, Eric, at the One Flag One Nation program held at the Arts Council of Southeast Missouri, Saturday, June 29, as he and Logan Tolliver led the flag ceremony.

“We all share this no matter what else is going on in our country,” said Davis. “We’re a huge country. All the elements are the same no matter where you go. We’re singing songs everybody knows, the flag ceremony is the same.

These unifying characteristics of being American were traditions that comprised the ceremony that included Arts Council members, musicians, the public and veterans. Held in the gallery space, the audience was surrounded by visual arts, many with a patriotic flair. The program was made even more special by musicians performing patriotic songs and popular songs during the Vietnam War era.

Clayton Hahs, a Cape Girardeau native and resident, was asked to musically lead the program two years ago when Randy Hayes, member of the Arts Council, initiated it.

“This year they invited me back. We wanted an afternoon that veterans could enjoy and take in the arts,” said Hahs. “Anytime I get asked to do anything that will thank them for their sacrifices, I do. It’s the least we can do to celebrate them and their country.”

Hahs’ military background includes serving in the U.S. Navy as Surface Warfare Officer and JAG (Judge Advocate General’s Corps) officer for nearly 14 years. He was accepted into the Naval Academy’s elite Men’s Glee Club and performed with the Naval Academy Chorus for the pope, parliament and the president.

Dave Carter, vice chair of the Arts Council of Southeast Missouri Board of Directors, began the program by drawing the audience’s attention to the two flags located front and center of the gallery space. They are a 13 star Betsy Ross flag and an 1861 flag from the Civil War with 34 stars.

“We have situations in our day when people are wanting to fight their way off the flag. We are all citizens of that union and hallelujah … we have the freedom.”

Lia Mastronardi, Arts Council of Southeast Missouri interim director then thanked all those, including the artists whose work hung in the galleries, for their hard work in making the program possible.

Hahs began the music portion of the program by saying, “Most of our songs are from the Vietnam era. That era was a defining time for America’s relationship with its military.” He said he felt it was important to honor all veterans and those that served during Vietnam because those who served then did not receive the honor they deserved.

Included in the musical repertoire were an interesting mix of songs about young love and expressions on the war.

Casie Mills, another Cape Girardeau resident, kicked off the program with an all-time favorite, “Soldier Boy.” She was a frequent entertainer with Mike Dumey Productions and has headlined in several local dinner theatre productions.

Mills said, “Anytime I get asked to do anything for veterans I thank them for their sacrifices. It’s the least we can do. Today we celebrate them and our country.”

As the program developed, Hahs inserted history about the Vietnam war. “The war officially began Aug. 2, 1964, but the United States was unofficially assisting France since 1954,” he said.

The Gulf of Tonkin battle resulted in a Resolution passed by Congress on Aug. 7, 1964, that gave the president the power to run large-scale military operations in Southeast Asia without declaring war. “The U.S. ramped up its war effort and fought with the South Vietnamese,” said Hahs.

Severe Communist losses during the 1968 Tet Offensive made it possible for the U.S. to withdraw many soldiers. By 1973, 95 percent of American troops were gone.

The Vietnam War was the first to feature live television coverage; the media had unprecedented access to the war.

Sometimes the information given to the public by U.S. officials did not match what the media was reporting. With the deescalation of American troops came songs of peace, love and protest — musical expressions that documented feelings of the people.

In Hahs’ opinion the motivations and hearts of the people were in the right place but some songs were not well perceived by returning veterans.

Expressive songs in the program included “I Got You Babe” by Sonny and Cher, Both Sides, Now” by Joni Mitchell and “What’s Going On” by Marvin Gaye.