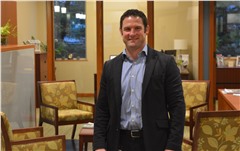 Few are as involved in the Jackson community than Kyle Thompson, the community bank president at the Bank of Missouri locations in Jackson. Thompson has been involved with the Jackson Area Chamber of Commerce, Jackson schools and many other organizations in the area.

“The bank as an organization is very much about giving back and being involved in the communities in which we have locations,” Thompson said. “For me, that has always been something that has been a passion of mine.”

As a result of that award, Thompson said the chamber has received many more opportunities across the state over the past year. He added that the majority of that growth should be attributed to the chamber’s staff, including Director Brian Gerau, but that being on the board has been an incredible experience.

“It’s given me more opportunity to interact with businesses in the area,” Thompson said. “I enjoy doing that anyway, but it has allowed me to stay extremely involved.”

Thompson has served on many committees for the Jackson R-2 School District and its foundation, including the strategic planning team. He has also assisted the schools through the Bank of Missouri’s partner in education program with Jackson High School and Jackson R-2’s early childhood program.

In the past, Thompson has been involved with numerous health-related organizations, including the American Cancer Society,  American Heart Association and Alzheimer’s Association.

He is a past president of the SoutheastHEALTH ambassadors and currently serves on SoutheastHEALTH’s Foundation Board of Directors. Thompson has also served as a coach for numerous youth sports teams in the area.

Thompson said one of his favorite things about Jackson is that it is innovative, but has continued to have a small town feel as it grows. “While history is extremely important, I think it’s fantastic that we have leadership in Jackson that still want to see Jackson move ahead,” Thompson said.

Thompson was born and raised in Jackson and said Jackson has always been his permanent residence. He was the third generation to graduate from Jackson High School, and came back to Jackson after graduating from the University of Missouri in Columbia.

“When I came back from the University of Missouri, I noticed how much had changed in Jackson,” Thompson said. “Looking back now 12 years later, the changes and the growth that has continued to occur is really something.”

Thompson said that growth can also be felt at Bank of Missouri, which now has two locations and over 20 employees in Jackson.

“In the role I’m in, I have the pleasure of being able to serve all 21 or 22 of those employees at any given time,” Thompson said. “I try to stay as engaged and hands on as I can with each of the employees, both professionally and personally.”

Thompson said he enjoys his role now, but would have never expected to enjoy working in a bank before he tried it. Thompson graduated college with an agriculture business degree, after several degree changes, and worked for the University of Missouri’s recreation department directly after graduating.

“I kind of swore to myself that I would never get into banking,” Thompson said. “My father was a banker and at that point I wanted to go my own way. I worked for the university for a year before I graduated, and at that point I really needed to do something in terms of getting a job in the real world.”

Thompson said that his father convinced him to give banking a shot, and he moved back to Jackson in 2004. Thompson first worked for Montgomery Bank, starting as a teller and moving on to consumer and commercial lending.

“In 2007, I had the opportunity to come to the Bank of Missouri, and I’ve been here since,” Thompson said. “I started here as a commercial lender and then moved into the community bank president role in 2013. I’ve been in that position for five years now.”

Thompson married his wife Erica, a second grade teacher at East Elementary, in 2005. They have three kids, 10-year-old Drew, seven-year-old Drake and two-year-old Ella. “We have two in school and one that thinks she’s in kindergarten,” Thompson said.

He added that they aren’t going anywhere, and plan on their kids being the fourth generation in his family to graduate from Jackson High School.