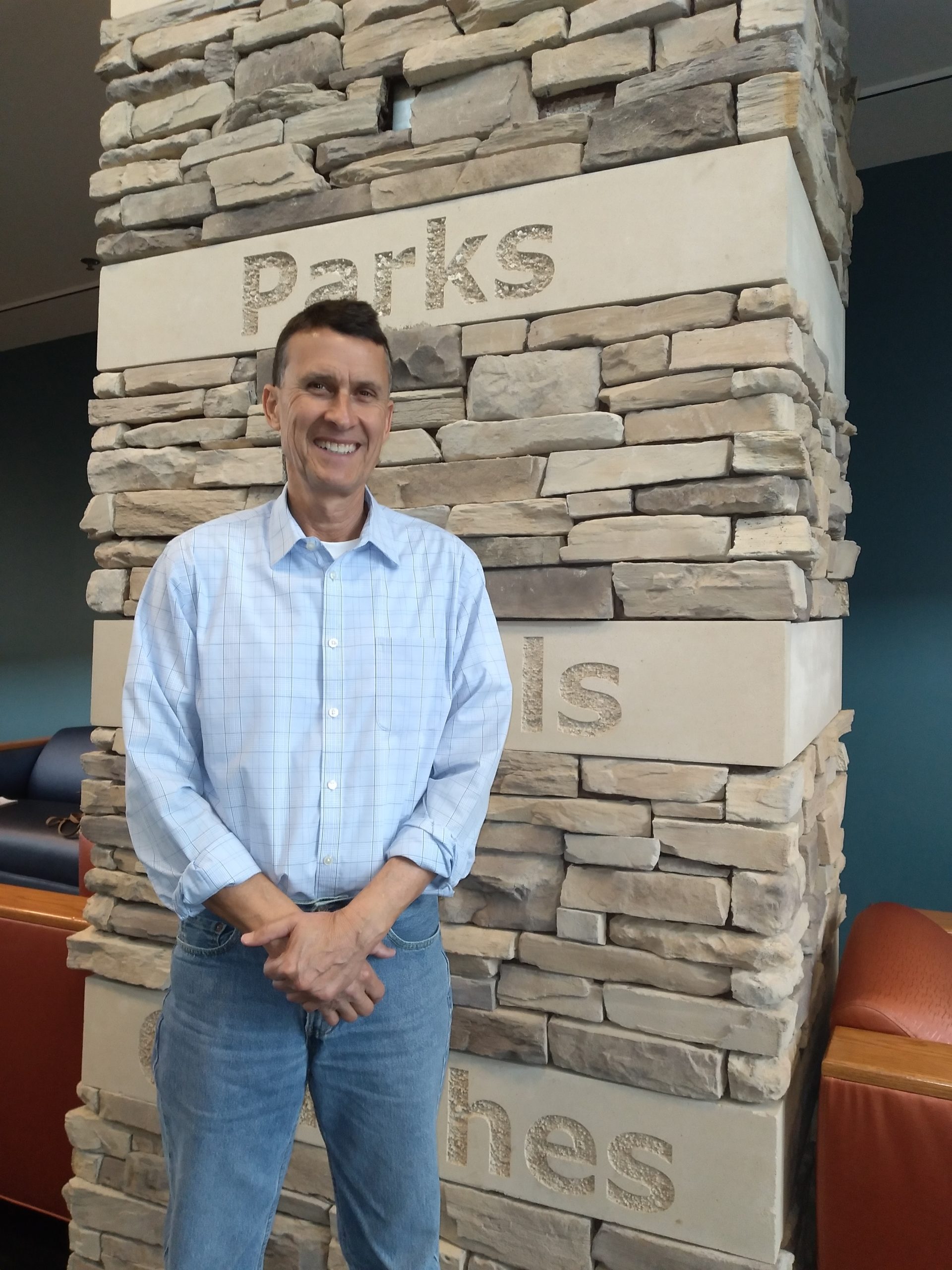 Shane Anderson served as the first Parks and Recreation director for the City of Jackson. He stands before the stone wall in the Jackson Civic Center. The Civic Center was built during his tenure. Photo by Christine Pagano

Shane Anderson neatly planned his retirement by selecting Feb. 9, the same day he started as Jackson’s first parks and recreation director in 1998. During that 24 year time frame he saw three mayors and one pandemic.

As the first individual to have served in this role, Anderson said he did a lot of questioning in regards to which direction to take and as the park developed, he pondered whether it was the right thing being done.

“There was no baseline,” he said. “The motivation was to provide a park system without worry and one that was safe. I began with a really good product. It (the park) was loved. I tried my best to complement it for the enjoyment of the community.”

He described his time as Parks and Recreation director as a wonderful time working with the city. “My greatest joy has been spending time day to day with the people.”

During COVID-19 it was disheartening to lock the gates on the tennis courts, but at the same time, seeing families walking together on the park trails seemed to make it better.

Jackson’s 2-mile walking trail is the most used feature in the park. There are future plans to extend the trails. “It’s great to see moms and kids, dogs, people riding bikes and walkers using it,” he said.

“The park is a special place. It always has been and always will be,” said Anderson. “For me growing up, the park was a really special place.” Riding his bike and then swimming the same day was a major bonus. “What more could you want?” he asked.

The Park was a place he learned to play tennis, which had a big impact on his future career as a professional player and instructor.

The year 2005 was a really big year, said Anderson. “We developed the skate park, moved the Soccer Park and added a Football Park.The Skate Park was such a neat project; the most satisfying of all. Noon Optimists and The Optimist Club, both of Jackson, funded it. A lot of research went into it. It is the second most used feature in the Park.”

A modular design was built instead of the preferred poured-in-place bowl design because, at the time, it was more cost effective.

“The Skate Park allows individuals more expression in comparison to playing on a team. Skaters come to talk, and see tricks. There’s lots of happiness there,” said Anderson.

One of the Park’s latest projects, a meditation garden built in 2021, is located near the new tennis courts. Debbie and Jeff Martin of Women in Action funded a spot for structured meditation and were so appreciative for the help in making it happen, said Anderson.

Some things Anderson wished the Park had more of are nature appreciation hikes and art appreciation programs.

The Homecomers 5K, the senior social dance and Rock in the Rock Garden are just some of the park’s assets in which Anderson takes pride.

Concerns about not overdeveloping the park are important in the balance of new recreation trends and Anderson is pleased with the success of disc golf and pickleball within the park system.

“My time as Parks and Recreation director was such a wonderful period in my life,” said Anderson.

Anderson said it is a good time for him to be leaving because he can step away with people in place he feels good about. Young people with a good grip on technology seemed important to Anderson.

As for future personal plans, Anderson said, “I plan on staying here. I think I’m a small town guy. I love traveling, but Jackson is my home. The future is open. Nothing planned. I need to do something day to day. I substitute-taught a little. It made me happy and I don’t feel anxious about getting anything going. I’m happy when I have a little challenge and deadlines.”

It’s no wonder that a man who loves Jackson and the community believes working for the good and benefiting the city is important.