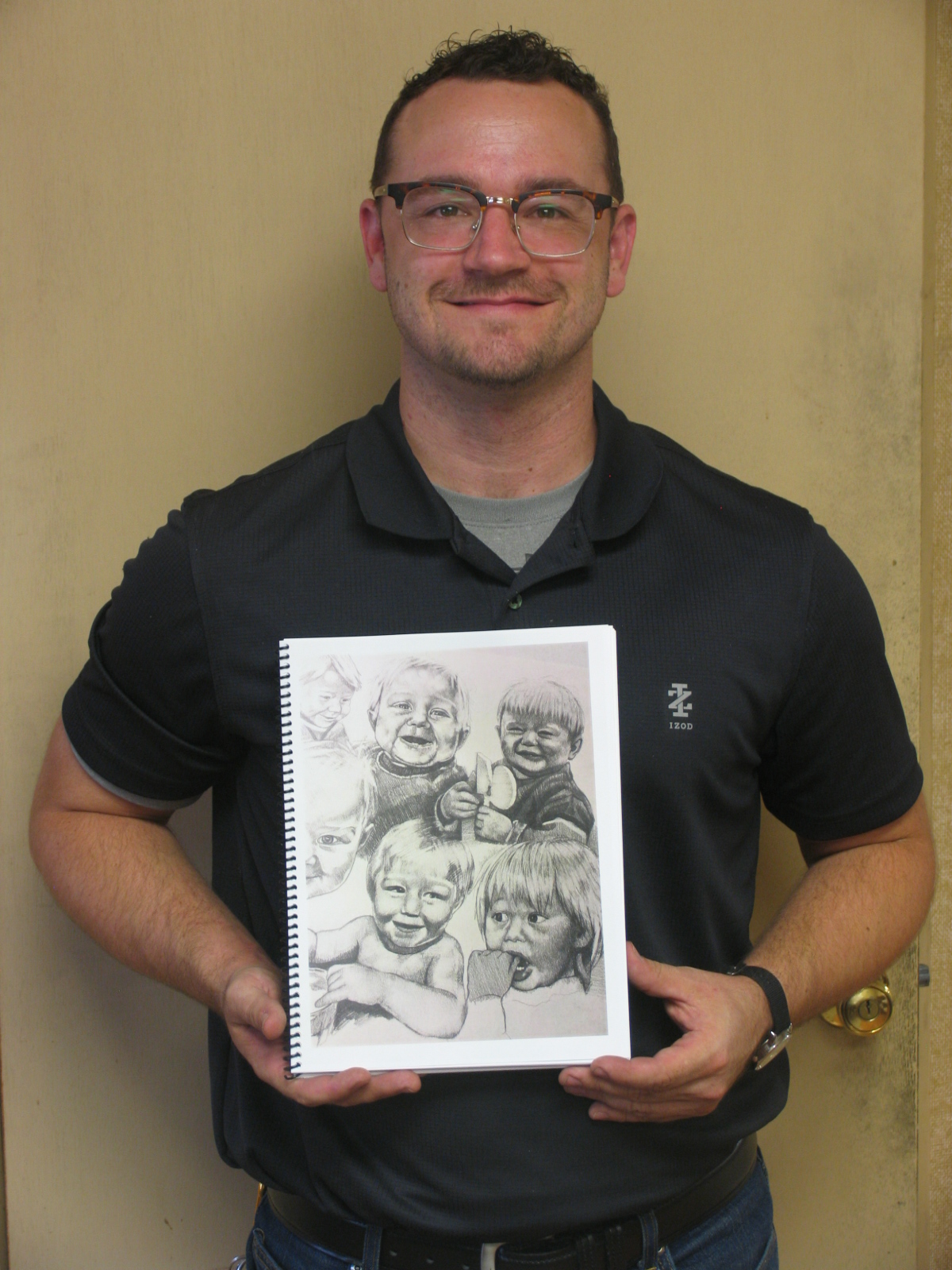 Andrew Singer likes to draw portraits from photos. He can combine several photos into one drawing, as he has done with this example. Photo by Gregory Dullum

Andrew Singer of Jackson has decided to use his God-given talent as an artist to fight human trafficking and help those affected by fatherless homes, by donating 25 percent of his fee to those causes.

Singer has an amazing talent as an artist. Although he does paint, he prefers working with pencil.

“I’ve been drawing my whole life,” he said. “The portraits I’ve been doing since high school.”

“I do pencil drawings from photographs of people, pets and houses. I do have two art degrees. But I no longer seek to make a name for myself. I simply want to bless others and help generate funding for these two causes.”

Originally from St. Louis, Singer graduated from Fontbonne University in Clayton with a bachelor’s degree in fine art and one in painting and drawing.

Not only can he reproduce a single photo, he can combine several photos into one drawing.

“Many people just want drawings of their family, whether they’re deceased, or maybe they never got a good photo with their loved one. Well, I can take two separate pictures, combine them into one, and make it look like they were taken together.”

Some people like to make collages by combining multiple photos into one drawing.

In one of his drawings, he drew the lone survivor of a family in the center of the paper, surrounded by his family members who had halos because they had passed away. There were a total of 12 faces.

Some people want to remember their pet who passed away, and he will draw a portrait of the pet.

Singer has also drawn portraits of famous people. “Maybe you’re a big fan of Elvis. You want a drawing of Elvis. That’s fine. Let’s talk about that.”

Singer says of his portraits, “A lot of times the drawing comes out better than the photograph was. They make the best gifts because they are all hand drawn.”

The finished drawings are on quality drawing paper and can range in size from 8 by 10 inches up to 18 by 24 inches.

He works by meticulously focusing on one small part of the face at a time. “I don’t look at it as if I’m drawing someone. I’m trying to capture small pieces of the shading at a time.”

Singer completes some drawings the same day they are ordered. He has completed some drawings in a couple of hours. More complex pieces can take three days or up to two weeks to complete.

Singer charges $40 an hour, and on average, it takes two to six hours to draw a portrait.

“When people see the quality of the portrait, usually the number I give them, they are very happy to pay it. And that’s before I was even offering to fight for these causes.”

“I’m a member of Project 200,” Singer explained. According to its website (www.p200.org), Project 200 is “a community of men that refuse to settle for just good enough. Our country needs men that are ready for change. We believe that through the power of discipleship we can begin to see men across the nation answer the call to be the fathers, husbands and community leaders that God has called us to be.”

“They have multiple causes that they are involved in,” Singer said. “The two that I’m most concerned about are fatherless homes and fighting against human trafficking. I partner with Project 200.”

Singer is a 2019 graduate of Adult & Teen Challenge, who then worked for the ministry for two and a half years. He helped manage the Sikeston thrift store.

“That program transformed my life. God used it to not only mature me, but He gave me a heart for those who don’t know Him. And really, I just want to introduce myself to the local Jackson community as an artist who has a heart to reach those affected by fatherless homes and I have a desire to help fight against human trafficking. Adult Team Challenge is a program in Cape Girardeau that transformed my life, and I simply want to give back.”

In addition to portraits, Singer has done wall murals and will do caricatures for birthday parties.

To get in touch with Singer, or to see samples of his work, go to Facebook.com/king-domportraiture. You may also call or text him at 573-200-4199.