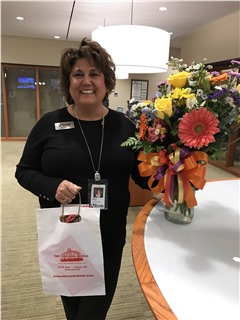 If you meet Tina Weber, there are three things you will learn in the first five minutes. She works at the Bank of Missouri, is a longtime member of the St. Paul Lutheran Church and she has lived in Jackson her entire life.

“I’ve only had 63755 as my zip code,” Weber said. “I’ve seen so many changes in this town. I remember riding my bike on 25 all the way to the swimming pool when I was a little kid.”

Weber said she has welcomed the changes and sees that although Jackson is growing, it doesn’t feel too big.

“We’re still a small enough town that you feel like you can get anywhere you need to be in a decent amount of time,” Weber said.

Weber joked that it seems like she knows almost everyone in town. She said it’s just because of the amount of time she’s lived here, but Community Bank President Kyle M. Thompson of Bank of Missouri said it’s more than that.

“She has a knack for developing very strong relationships,” Thompson said. “When we’re looking for new business for the bank, sometimes we don’t get to whom we need to talk to. But when you ask Tina, without fail, within about 48 hours she’s back in my office saying we have a meeting.”

Weber started her career at Cape County Bank when she applied for a job as a teller. She said she started out at a little drive-through bank that was where Subway is currently.

When she started working at the Bank of Missouri 20 years ago, she said it reminded her of Cape County Bank and was a lot smaller than it is today. She added that if it weren’t for Bank of Missouri President John Thompson, she would not be where she is today.

“He and I opened up a little satellite office down by Domino’s Pizza,” Weber said. “It was brand new, and we were brand new to this area. We were slower then, but he taught me so much on each individual loan and how things worked. He taught me step by step how the banking world worked. That was a valuable education that you cannot get anywhere, and I owe a lot of what I know to him.”

Weber started out at Bank of Missouri as a loan assistant, before being a real estate lender at the bank for 15 years. She said it was at that position she was able to get to personally know her customers.

Two years ago, she shifted to business development and now focuses on treasury management for businesses.

“We look for new business, we’re always promoting the bank and always market the bank,” Weber said. “If anybody ever meets me, they know I work at the Bank of Missouri, because I always promote it.”

Weber has also helped Jackson grow by using her strong relationships and skills to better many organizations in the area. She was on the Jackson Park Board for around 20 years, helping create Movies in the Park and oversee numerous enhancements to the sporting fields at the parks.

“We’ve always tried to do things to give back to the park,” Weber said. “We wanted people to be aware of how great our parks are here because they are so beautiful.”

Weber has recently moved on from the park board, and now serves on the planning and zoning committee for the city. There she helps plan for the future development of the city and provide rulings on proposed zoning changes or requests. Though she is new to the board, she has already become an active member who provides analysis from a real estate banking perspective.

“It’s helped that I was a real estate lender, and I understand a lot of that,” Weber said. “But I still have a lot to learn, and I’m still learning.”

Weber is also the current president of the Southeast Missouri Network Against Sexual Violence (SEMO-NASV). The organization helps children and adults who have been sexually or physically abused.

“We see almost 600 people a year across nine counties,” Weber said. “They are kind of unsung heroes.”

The organization had some financial trouble a few years ago when a former director stole funds, and Weber said the organization has worked nonstop to get back on its feet and provide much-needed services.

Weber is also a member of the SEMO Booster Board, where she volunteers for the trivia committee.

At St. Paul Lutheran Church, Weber is a member of their finance board, which keep track of the money the church collects every week. Weber said she had gone to the church since she was born, having also gone to elementary school at St. Paul.

What connects all of Weber’s work is her connection with others in her community. Whether meeting with the other board members at her church or greeting someone who visit her at the Bank of Missouri, she genuinely wants to get to know them and help them the best she can.

“She’s a helper,” Thompson said. “She puts others above herself. Obviously she puts her family above herself and she’s no different here at the bank.”

“I like to know that I’ve provided the best service for my customers and I’ve helped them, “ Weber said. “I want to know they left my office better than they came in.”

Weber said she hopes to retire from the Bank of Missouri and stay in Jackson, a city she is proud to call her hometown.