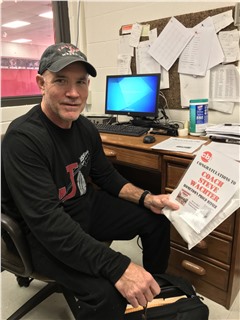 Last week, Steve Wachter celebrated his 59th birthday during what is now his 36th year as a coach for the Jackson wrestling program.

This is Wachter’s 24th year as the team’s head coach, taking over the program from former coach Bruce Thomas in 1994, who also happened to be one of Coach Wachter’s mentors in life.

This season, Wachter broke the SEMO Conference record for most dual meet wins by a head coach, now standing at 204. The junior varsity team also has a record of its own under Wachter, which is the state record of 27 consecutive undefeated seasons.

Coach Wachter referenced a quarterback he saw on television once, who quoted his grandfather about what it takes to be successful: “When you do some great things, you have a little to do with it and other people have a lot to do with it.”

Wachter was born and raised in Jackson where he grew up in a Christian household with two parents who taught him a key trait in life, and that is how to out work everyone else.

“[My family and I growing up were] old school in that we are going to work everyday, we go to school everyday, we are going to church every Sunday — you learn how to work,” Wachter said. “If nothing else goes right, if you can’t do anything else, one thing for sure is you can out work everyone else. Doing things right and working hard and being there everyday was high on the list for our family.”

Growing up, Wachter’s favorite sports were baseball, basketball and football, which were among the sports he played his friends and family with in the small town he loves.

Wachter said he and his friends also made up their own games instead of playing regular sports, which also included designing fields for the sport.

In school Wachter, like many other students, was a three-sport athlete participating in football during the fall, basketball in the winter and baseball in the spring.

It was not until his sophomore year Coach Wachter began wrestling after Jackson coach Paul Webber gave him some advice that unknowingly set the course for the rest of Wachter’s life.

“I played basketball until my sophomore year, but I had a high school coach [Webber] that said there’s not a real high outlook for a kid that’s  5-foot-4, 5-foot-6 playing guard. ‘You might want to think about something else,’” Wachter said. “I was pretty aggressive at the time, so I guess he had thought, ‘I see a real small lightweight wrestler for me that’s really wasting his time trying to play basketball.’”

Wachter said he loved wrestling right from the start, and it was tougher than any other he had competed in.

Coach Webber continued to have a major impact on Wachter in his high-school career and was also his major influence to become a coach.

Wachter noticed Coach Webber’s organization as well as his motivational skills, but he also noticed the value of what Webber was doing by leading and mentoring these young athletes.

“[Webber’s] process was to be tough and to outwork everyone else,” Wachter said. “We weren’t necessarily the best technicians, but we were probably by far in the best shape out of anyone. We had really hard conditioning practices, and he would say and do things to motivate us.”

During Wachter’s senior year in 1977, the wrestling team won the program’s only and Jackson High School’s second-ever state championship.

Wachter was named Jackson’s Most Outstanding Wrestler along with teammate Kevin Rampley, who won an individual state championship the same season.

“We were state champions, and looking back I was really fortunate to be a part of a bunch of outstanding men that loved wrestling and worked hard,” Wachter said. “We also got along really well. We all liked each other and supported each other, and it was a really great opportunity for me.”

Wachter believes many other athletes from both football and wrestling were also inspired by Webber and Bob Sink because they noticed how much both of these coaches enjoyed their jobs.

Coaching for Wachter was something he felt he could hang his hat on and give value to his life, and he began his 36-year journey in 1982 when Thomas took over as Jackson’s head coach.

Wachter said Thomas was an outstanding coach with his knowledge of technique in the sport of wrestling while also bringing the motivational factor like Webber did.

“[Thomas] and I made a very good combination for a long time,” Wachter said. “We had 12 years together, and so when you look back at how fortunate I was since Coach Webber was a hall of famer in Missouri, Coach Thomas is a hall of famer at [Southeast Missouri State], the state of Missouri and the National Federation.

“Coach Sink made the National Hall of Fame for his Distinguished Service award for his service to Jackson and the sport of wrestling. I was coached by three hall of famers, and I was under a hall of famer [as a coach], so that was pretty big.”

Wachter said he had not thought much about it when he took over as head coach when Thomas stepped down, but he said it felt like it was what he was supposed to do.

As a head coach, Wachter said he enjoys all the challenges that come with the job such as the different types of people that come through the program.

Starting off, Wachter also wanted to prove himself as a coach since he was following in the footsteps of Webber and Thomas. He found out soon enough that there was more to the job than winning championships.

“A lot of times you may not have the kids to [win championships], but that doesn’t mean they aren’t doing some great things, being successful and reaching some of their own goals,” Wachter said. “As time goes on you start thinking, ‘This is not about me at all. This is about helping these young men achieve their goals and be successful  wherever it may lead them.’”

Wachter continues that same process today by helping his athletes be as successful as they can be and to honor them and God while also making sure what he does is the right thing for everyone.

One of Wachter’s former wrestlers, Pee Wee Bartels, started wrestling when he was younger, but it wasn’t until his freshman year when he began competing for Wachter directly in 1995.

“He’s just a true mentor,” Bartels said. “Although he was a wrestling coach, he could teach you a lot about life through wrestling. I learned a lot from him on how to handle myself and really just to be a man to be honest. He’s that kind of a figure and had that kind of an influence on not just me, but anybody that wrestled for him would have the same opinion.”

For 31 years, Coach Wachter taught American History, which is where he spent his time between the two-a-day practices his team had three to four times a week during the season.

Wachter described his routine when he was both a coach and teacher as “pretty tough” since his days began at 4:30 a.m. and did not end until 8 or 9 p.m.

For many years this was because after the high school’s second practice, which usually went from 3:30 p.m. to 6 p.m., Wachter would oversee Optimist Wrestling practice.

His current assistant, and who Wachter describes as the backbone of the program, Jerry Golden, took over USA practice to take some of the load off.

“[Golden] has that old school work ethic,” Wachter said. “He wakes up at 4 a.m. and he doesn’t go to bed till 8 or 8:30 at night, and he’s working that whole time. He’s an incredible assistant, and he hasn’t lost a junior varsity match yet.”

When Jackson has tournaments over the weekend, Wachter leaves with his team in the afternoon on Friday and does not return home until late Saturday night.

“Once you get rolling with the season and how it really is in the world of wrestling, it’s pretty well seven days a week. It’s a lot tougher than most people would think it is, and [some] would rather have it be [easier]. Being retired [from teaching] it’s a little different system, and little bit better for me.”

Coach Wachter said he has been blessed to have worked under great bosses and principals who understood coaches.

Wachter is also thankful for the assistants he has had in the program like Golden, but also Brandon and Nathan Norman, who coached with Wachter before Golden came on board.

“We’ve also been very fortunate to have the last couple of years to add to that and have younger assistants help me,” Wachter said. “I’ve had Matt Wendel run [Optimist Wrestling] for over 20 years, and he’s been outstanding. I’ve had former athletes like Coach [Andy] Stover and Coach [Travis] Turner coach the eighth grade. There’s also others that I’m not mentioning that were incredible to our staff.”

The number one person that is the main reason why Wachter has been able to coach at Jackson and have success is none other than his wife of 29 years, Becky.

Wachter said a lot of people truly do not understand the type of sacrifices a coach’s wife has to make by running the household and keeping the family together while they are not home.

“I have two daughters and a wonderful wife. [My wife] ran the household — she ran the roost at home all the time when I was with other people’s kids,” Wachter said. “Looking back when I was younger, I didn’t realize when you get old you say, ‘There’s a lot of people that do a lot of things to help me be able to coach.’ My wife is the number one person that allowed me to be able to do that.”

Even though Wachter has been busy throughout their 29 years of their marriage with wrestling, that doesn’t mean they didn’t have fun.

Their daughters were both committed athletes as each played basketball and were in track and field.

Being a wrestling coach also helped with both of his daughter’s track and field careers because he knew they would have to travel and practice with trainers in St. Louis to compete at a high level.

“We traveled a lot with track and field especially when we went to USA AAU national meets, and we kind of made a vacation out of things,” Wachter laughed. “Sometimes my daughters didn’t think it was a vacation, but we did. That’s kind of how we did things as a family. It was really neat, and it was a great experience for them doing those things.”