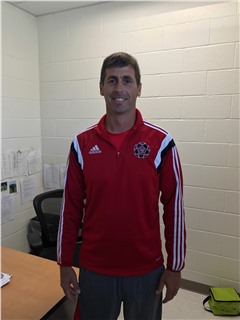 What drew you to coaching?

Probably just the competitiveness that I have in me. Every since I was a kid I’ve always loved competing and being involved in sports. I played basketball, wrestling and soccer. I even got into golf [during college]. The competitiveness in me just wants to get better and work at it.

And I love the teaching part of it. There’s nothing more enjoyable than working hard with some kids or trying to help them out, and then all of a sudden see that success on the field. That’s probably the biggest thing for me.

What led you to your current position?

I took a job here from [Southwest Baptist]. They told me there was a job opening in the southeast Missouri area at Woodland [High School]. I was newly engaged, and my wife is from Memphis, and I’m from Mount Vernon, so when I took this job at Marble Hill we thought it was a good halfway point for starting off our life.

I did that for a couple years knowing I wanted to coach soccer. I coached basketball when I was at Marble Hill, but I knew I wanted to get into soccer. We were looking to move out of there, and the job came open in Jackson two years later.

So I moved over to Jackson to take a [physical education] job at South Elementary when it opened. I started volunteering that year, and was hired on as the assistant coach the following year for soccer. I took over as the head coach and coached the boys and girls team [in 2001]. I did that for six years before I let the girls go and took boys golf, but I’ve always kept boys soccer.

What aspect of coaching do you like the most?

I love the competing part. I love that part of soccer — competing and going against somebody. The defense you can affect or not affect on the field. I really enjoy that part of the game and seeing that.

Golf is a little bit different because you are just competing against the course. You don’t play defense on each other out there, so it’s a whole different thing. You actually find yourself rooting a little bit for the other kids because you’ve gotten to know the [Poplar] Bluff kids, the Cape [Central] kids and [Cape] Notre Dame kids. I’m just hoping they play well, but I’m just hoping my kids play a little better. It’s just different.

You hang out more with some of the coaches in golf while they’re watching a round. I find myself helping the other kids out — if they have a question on a ruling I’m going over and trying to help them out to find the correct ruling that’s going to benefit them. All the golf coaches do that.

Soccer is just different. It’s the ‘us versus you,’ and that’s the enjoyment for me. I love that part of the game where you are just playing against another team, and every day is a different day. You never know who’s going to win. You put the records out, and you’re there to compete.

What do you find to be the most rewarding thing about your job?

I love doing my day job. I love doing elementary P.E. — I’ve enjoyed that since I’ve started. I’ve always wanted to be in elementary. These kids come into the building with a big smile on their face. You tell them we’re going to run four laps a day and they are cheering and saying, “Yes! I can’t wait.”

I try and gear my P.E. classes to have fun. We are going to do a little bit of exercise, a little fitness, but for the most part we just want to have fun, teach them how to get along with each other and enjoy activity.

What does a typical day look like for you?

Some people think you might have it easy, but when you’ve got elementary P.E., you don’t really have a break during the day. You are go, go, go. When they walk into that gym you can’t go sit down at a computer and watch film while they’re taking a test or doing anything else. You’re kind of stuck with those kids as far as your eyes have to be on them every second. You have to have a lot of energy.

There’s times I go home and my throat is sore, and I’m going to practice worn out because I’ve been running around chasing kids, playing tag with them or dodgeball or whatever game.

You’ll find me a lot of times on the ground riding on a scooter playing with them just because that’s what those kids love. They love that interaction with the teachers and coaches. So if I can get down and do that and hang out with them, they like that. It makes them enjoy P.E. a little bit more.

It shows them we don’t have to be competitive in everything we do, and we don’t keep score. We just want to have a good time, have fun and enjoy it while we’re in here. It just goes, goes, goes, and then as soon as I’m done here, I try to get all my stuff together and get switched from that kindergarten mode to dealing with high school kids.

Those kids that come to me after school want to be out there, and so that’s what I really enjoy. They come out there ready to practice, and so my mindset has to change to soccer. Now we are trying to be competitive, and we are trying to push kids to get all that we can out of them in a practice.

That mindset changes real quickly, but its good for me, too. I get to see both sides of that everyday. It does wear on you a little bit, but what job doesn’t? At least at the end of the day, I’m happy to come back to my job.

What are you most proud of about the area?

For us, my wife and I were basically on the five-year plan. We thought we’d be here for a max of five years, looking to get out in about three years. After I took the job in Jackson and we were here for two years, we really started to fall in love with the Jackson area. In fact, we were looking for some housing in Cape when we first moved to the area.

When I took the job in Jackson, I knew right away I wanted a house. I wanted to live in the community that I coached in. Starting to coach and teach in Jackson there for a couple years we realized that five-year plan was out the window. We liked Jackson, and we thought it would be a great place for us to raise our kids. We love the community, and you’re right next to Cape. We are only two hours from my parents and three hours from [my wife’s] parents for the kids growing up.