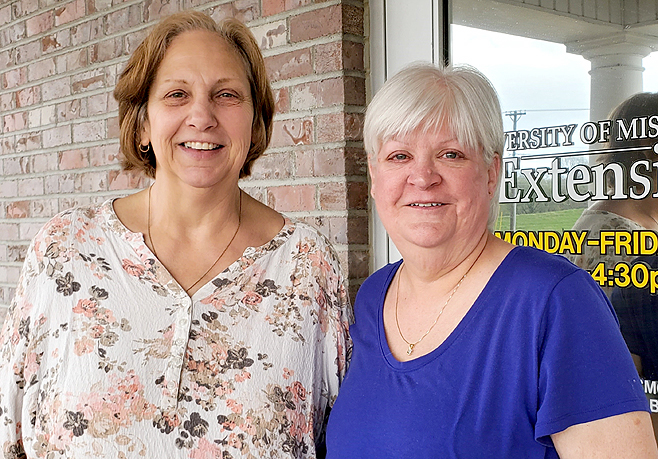 Perhaps their retirement Friday, April 2, made them more reflective, but this pair of former University of Missouri (MU) Extension Council employees, Ruth Timberlake and Teresa Meier are both Hometown Proud!

Stephen’s music degree took him to Potosi and then Oak Ridge Schools as music/band director. Right before they were married, Stephen became a postal letter carrier in Jackson.

Jackson is special because, “This is where we raised our sons and have our Christmas tree farm, Meier Horse Shoe Pines. Jackson is still full of community pride and small town good things!” said Teresa.

It is special because, “Jackson is my hometown and has been for 68 years. As the sign says, city of Beautiful Homes, Parks, Schools and Churches. It should include people too.”

The Christmas parade is Timberlake’s favorite Jackson event because she loves Christmas time. She explained how the people of Jackson have caused her to prosper.

“Working with Extension for 43-plus years, I have met numerous individuals: farmers, business people, 4-Hers, FCE members whom I have grown very fond of. I have gained a tremendous amount of knowledge on a variety of subjects working with different specialists throughout the years. The people are what I am going to miss most about retiring!

Timberlake’s family lived on a farm (old house without indoor plumbing or running water) near Burfordville until September 1967. “Mom and Pop sold the farm due to my dad’s health, and we moved into Jackson.” She graduated in 1971 from Jackson High School.

Meier feels Jackson has caused her to prosper because, “Our family has enjoyed sharing our Christmas tree farm with the community!”

Her favorite event is the Muny Band concerts in Jackson City Park during the summer.

Meier described Jackson as a, “Friendly, down home and small town.”