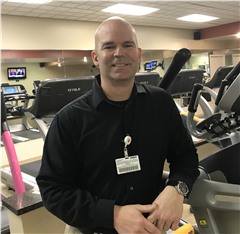 Scott Givens, who manages the Southeast HealthPoint Fitness location in Jackson, has worked for Southeast-HEALTH since 1994.

He has worked at the location on Main Street since the hospital purchased the fitness center almost 23 years ago, and has been manager for the past 16 years.

What drew you to working in health and fitness?

I always had an interest in it, even in high school. I did a career shadowing at some physical therapy and sports places and it just kinda stuck. I went to school here at SEMO for exercise science, health management and athletic training all together, and right out of school I started working for the hospital. I’ve been here ever since.

What aspect of your work do you find most rewarding?

I like the diversity of it. We have a range of people who come in at all ages, from 16 to 89. [Actually,] with our Kids Bee Fit program, we could be working with two-year-olds.

It’s a great field in a great town. We do community projects and do things here at the fitness center. Being connected to the hospital opens us up a lot, and we have a great relationship with the cardiac rehabilitation and physical therapy in the other half of this building.

What are you most proud of here?

SoutheastHEALTH has has a presence here in Jackson since 1994. Of our 22 staff members here, I would say more than half of them have been here for at least 15 years. I think that says a lot about the hospital and the rapport we have with the members and the staff.

Are you originally from this area?

Cape and Jackson both have a nice, hometown feel. Both are growing and expanding — what one doesn’t have, the other one might. We’re close to a lot of areas like St. Louis and Memphis. We draw in a lot of stuff.

What is something you think most people don’t know about you?

I think a lot of people may not know what I actually look like. By being involved in a lot of events, or whenever I gave a talk years ago, I thought it was more entertaining to talk while dressed as some type of character.

When you do that once, it starts to spread. I’ve done Richard Simmons, Elvis, some Star Wars characters, Santa Claus and John Travolta in Saturday Night Fever.