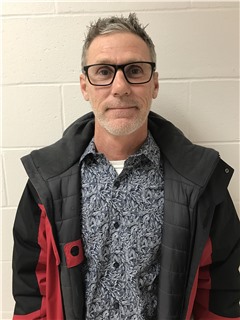 Jefferson Fox is the custodian supervisor for the Jackson R-2 School District. He also is a musician who writes and records his own songs. His work can be found at jeffersonfox.bandcamp.com.

How did you get into music?

I was a young child and loved music. I had a great uncle who became a career musician after trying to for quite some time. He got his first full-time, good-paying music gig when I was six years old.

That year, he mailed every grandchild, nephew, niece — everybody under 12 got a guitar for Christmas. It was an inexpensive little classical guitar on a baseboard box, and my mom got me guitar lessons. That was that.

What are you currently up to musically?

I’m almost done with a full-length album that I’ve been working on for close to a year. And I have a couple projects started including a solo acoustic project.

I’ve been caught up in the weeds mixing projects for other musicians — doing some mastering work. I do a lot of audio work at home.

How would you describe your music?

I usually call it unpopular. I jokingly call myself “the king of unpop.” I don’t try to write any particular kind of music, so it ends up a mix of rock and roll, country, jazz and whatever I’m listening to. It just spills out how it is.

I’m not trying to sell records anymore — for me it’s an art form. It’s like somebody who paints, except I write songs and record them.

Can you talk about your work at Jackson R-2 Schools?

I’m the district supervisor for custodial, so we have the 10 schools and they’re growing. I currently have about 55 employees, and we try to keep the buildings clean and a good working environment for the teachers and kids. I do take a lot of pride in it. It’s a nice balancing act.

Are you originally from the area?

I am originally from southeast Missouri, but I was raised military and we traveled. After graduating high school in Savannah, GA, I came back to visit. The next part is I met a girl and got married.

We moved away and lived in Wyoming for a while.

We didn’t like the school system there at all, and my wife wanted to move closer to home. We’re from Puxico and Poplar Bluff. The best public school system that we could find was Jackson, so we came here.

What are you most proud of?

My children. I have two exceptional kids — one is 21, the other is 12. They’re both very compassionate, very hardworking, smart and great people. I think the best work I’ve put into my life was raising those two kids.

I’ve always liked Missouri because we have such drastic weather. I like the fact that we have a good hot summer, a really cold winter and all the things in-between.

Is there something you would still like to do?

There’s a lot of things I would still like to do. Lots more music to make. My greatest desire is to help kids realize their creative potential through music in some way — classes, seminars, a business dedicated to it or something. I’m unclear on the means but that’s the global vision.