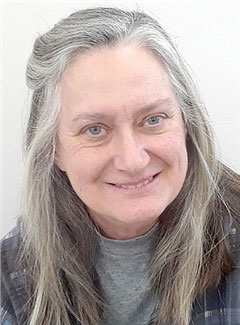 “I love being surrounded by books,” she said.

When RRL was located on Union Avenue, she and her husband were driving by on the way to Texas for vacation. They saw the book sale sign, stopped, and discovered so many new titles, they had to go back home to put them away before leaving for vacation.

She signed up to become a F.O.L. member, but she’s not sure how she became president after only a year. “The F.O.L. group I work with are some of the most encouraging, optimistic people,” she said. “They are people who understand what people like about books, and they are non-judgmental.”

“One hundred percent of the money raised goes to projects not budgeted,” said Hamilton. “Things like signs, furniture, and shopping baskets for children to push around the library — are where we come in. We always vote and none of the money goes toward the budget,” she said.

Enrollment in the group has increased from 80 to 115, and they are all volunteers.

“As for volunteering, my steadiest thing is Friends of the Library,” she said. “Everything else is happy surprises.”

The day we interviewed, Hamilton’s work in piano restoration began at 8 a.m. at Lambert’s Café in Sikeston. “Geneva’s foot pedal broke so I had to repair it,” she said.  “I’ve been doing this for 35 years (restoring, tuning, rebuilding pianos). I’m always at churches and in the schools, because I tune pianos.”

Connections to the community of Jackson and those throughout Southeast Missouri are a result of the service she offers, but it seems to go deeper than that. When she takes out her phone to document what the process of rebuilding the Jackson History Center’s piano entailed, you realize you’re meeting with an individual who is really bonded to the work she does.

“I’ve got to show you this,” said Hamilton, as she scrolled through what seemed like a million images. “Here is the serial number with flowers painted around it.” It seems as if the personal connection to the instrument really impressed her.

Her most recent endeavor, rebuilding the Jackson History Center’s J. & C. Fischer piano, helps to define Hamilton’s link to Jackson. Completed in February, 2020, the overhaul began in August 2019. The hammers were moth infested, pins were changed out and many of the components had to be replicated because of the piano’s age — circa 1876.

And although Hamilton is not yet a Jackson History Center volunteer yet, she’s considering it. “They made me an honorary member,” she said.

Hamilton seems to naturally form a personal connection to the people she is around.

“It’s an interesting business. Tuning in a person’s home is totally different then when you’re in a retail setting. It’s more personal. They’re very open to telling you about the events in their lives; we share recipes, doctor visits. I love it. I really do make friends working with them,” said Hamilton.

Homecomers at Jackson brings back lots of fond memories of performances when she was a child. Formerly Erica Voss, she played piano and performed as a ballerina from 1968 to 1974. “My brother was an acrobat,” she said.

“At Homecomers I loved to sit on the courthouse steps. It was so much fun. I had friends in Jackson but did not visit them,” she said. Instead, she made Jackson friends in the summer while earning high school credits at Campus School at Southeast Missouri State University. “A bunch of us came back every year.”

Hamilton lives in Cape Girardeau and grew up on a farm in Advance. She stays in Cape Girardeau because she and her husband, Glenn Hamilton, a preacher at Antioch Baptist Church, “have been there so long. Jackson is very beautiful and clean. I understand why people move there,” she said. “Jackson people are very easy to get along with. They have a priority of music.”