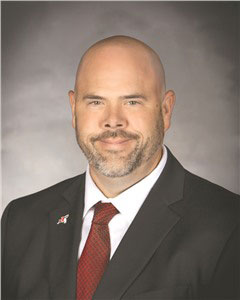 Kinder said he loved growing up in Jackson and his school experiences. He added that being able to return to his hometown was one of the most exciting aspects of taking this new role. “When you believe in education and you attend a good school, it’s great to come back to the district that provided so much to you,” Kinder said.

Other factors Kinder had for taking this position were the many people he knew who worked in the District and the reputation the District has in the area.

“Jackson schools have a great reputation academically and in its extracurriculars – it’s the total package.” Kinder said. “This is a great place to be.”

Kinder replaces Bleau Deckerd, who served as associate superintendent of finance and business operations for three years. Deckerd will be superintendent for the Nell Holcomb R-4 School District this coming school year.

Since accepting the job, Kinder has been going to monthly meetings with staff members in the District and Deckerd to make the transition as smooth as possible. Kinder said the administrative team has a similar vision for education as him, making it feel like a good fit.

“It’s been nice to come back home,” Kinder said. “Not that I’ve had bad experiences where I’ve been, but there’s something about being at your own alma mater. You’re walking around the buildings checking on maintenance and repairs, and it’s places where you’ve been and you see people you’ve known all your life. That’s pretty neat and exciting.”

After graduating from JHS, Kinder attended Southeast Missouri State University and graduated with a B.S. in secondary education-social studies degree in 1997. He then was hired to be the history teacher at Leopold and stayed in that posistion for eight years. As a teacher, he was the softball coach, helped with the basketball team and worked on the professional development committee.

Kinder then served as the principal at Leopold for seven years, being in charge of elementary through high school students. “I had a kindergartener and a senior in my office 10 minutes apart,” he said. “I had the total administrative package there.”

Kinder was promoted to superintendant of the Leopold School District in 2011. He served in that role for seven years.

Kinder is married to Christina Kinder, who is a public school teacher. They have two children, Deacon and Daisy.