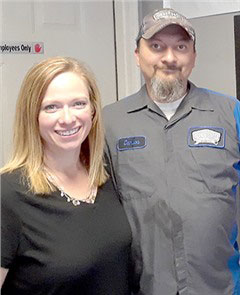 Amy and Carlos Ybarra of Fruitland always wanted to open an automotive shop. Once they decided to, it took about two weeks to make it happen.

“People empowered us from the get-go,” said Amy. The couple has spent seven years growing Gear-heads in Jackson while gaining neighbors and friends.

Both Carlos and Amy originated from St. James and don’t have extended family nearby. Their two children are Selena, 13, and Sophie, 7.

“This is home for us. Our kids were born and raised here. Because it is our kids’ hometown it kind of makes it ours,” said Amy.

Jackson’s motto, “City of Beautiful Homes, Parks, Schools and Churches,” rings true for the couple, but the schools seem to stand out the most for Carlos.

“It all boils down to the schools. People want to move here if you have good schools because they want to bring their kids up in a good environment,” he said.

For Amy, one of the best things about starting her day happens at the student drop off line at Jackson Middle School.

“Mr. Martin, the assistant principal greets all the parents and kids every morning. He shakes their hands and waves to every car. He makes everyone’s day.”

“We also love that we feel safe in Jackson. When you go to football games, it’s nice that you can let your kids run around with their friends. You know that other people you know are watching out for them,” said Amy.

“The Jackson community can be considered large with its nearby access to Cape and all, but it has that small town community feel,” said Amy.  “People are always willing to help you.”

Carlos, who likes to barbecue, helps with selling barbecue at Jackson football games. “I like barbecuing. It’s American. And it’s not for profit, the money goes back to school sports.”

“The main way we give back to the community is through the stuff people don’t know,” said Carlos. “Sometimes we give away labor. We get paid for five hours and do eight, or just the other day we had a customer who ran out of gas, and we gave him a gallon.”

It’s about being good neighbors.

In the past the Ybarra’s have held Knowledge is Power programs at their shop to educate women on automotive issues. Carlos and the other mechanics explained automotive systems to promote understanding so women could be aware of what to look for in breakdowns, describe issues to their mechanic or just maintain their vehicles. Proceeds from the program benefitted breast cancer.

Amy, who is a member of the Jackson Chamber of Commerce Women’s Impact Network, will speak on what women should know about cars from 11:30 a.m. to 1 p.m., Thursday, Sept. 13, at the Jackson Civic Center.

She said, “Because the community has welcomed us so much, we want to give back.”