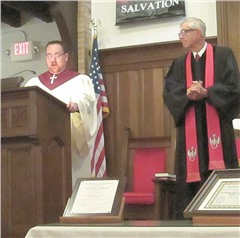 Worship service at Emanuel United Church on Sunday, Sept. 24, began promptly at 10:10 a.m. as always, with a graceful 10 minutes of visiting between Sunday school and worship. With the pews full, it surely seemed as if all 250 members were present for the 150th anniversary celebration. It was a multifaceted day comprised of symbolic worship, a celebration luncheon and program packed with joy.

An emphasis of where they’ve been, where they are now and where they are going as a church prevailed. The congregation also marked its 90th year in the new building when, at that time, Pastor Jankowski preached in German, followed by a message in English by Rev. R. Lehmann of Christ Evangelical Church, Cape Girardeau.

Organized in May, 1867, The Jackson Evangelical Church took root with 28 German-American residents who worshiped and studied in their native tongue. The Baptist Church on South High Street, Jackson, offered its sanctuary to the fledgling JEC for Sunday afternoon meetings. The friendly connection continues today as both are linked to the Jackson Ministerial Alliance. Without a pastor, The Jackson Evangelical Church called upon Rev. Johann Frederick Kies, who was teaching and preaching at the Bethel Church of Pocahontas and assisting other churches as well. He agreed and services were held every third Sunday afternoon in the Baptist Church.

Present Pastor Joseph R. Rowley will walk in the footsteps of Kies from Poca-hontas to EUCC on Sunday, Oct. 8, leaving at 7 a.m., in time to lead worship. He said, “When Kies was serving, he would take a horse and buggy if possible, sometimes he walked.” Roughly a three-hour walk, Rowley, who considers himself a very fast walker, plans to practice the 9-mile journey.

By 1872, the church was without a regular pastor but enjoyed temporary services of Revs. Stoecker and Kochendoerfer from the Salem Church and Rev. Eschenfeld of St. John’s Church, near Oak Ridge. The church was reorganized and by 1886 Rev. J.F. Koletschke led the church. At this time the first parsonage was built at 309 East Main Street.

The church continued to grow and evolve with new names such as The Emmanuel Evangelical Church, Evangelical and Reformed Church and finally it’s last name change in 1959, the Emanuel United Church of Christ. In its 150 years of ministry 1152 baptisms, 956 confirmations, 641 marriages and 976 funerals have taken place.

Sunday’s service included a Call to Worship from the May 20, 1928 church dedication service, Prayer of Opening from the 1964 education building dedication service and reflections from the 1928 Souvenir Booklet. Choir director, Beth St. John, commented, “Music has always been very important in our church.” Led by St. John, the choir sang, From Generation to Generation during the children’s message and quilt dedication.

Pastor Rowley explained the historical symbols set out on the sanctuary table.

“In memory and honor of those who have since passed away, this cloth from India was brought back by Miss Lydia Kies, who went there to serve like Jesus Christ taught us to serve.”

Other items included a souvenir booklet from when the church was built in 1927, a congratulatory certificate given to EUCC by the wider church and an honorary certificate for Pastor Sam.

The red and white quilt that hung from the sanctuary podium was designed in four stacked panels designed to commemorate 150 years. The quilt got its start at EUCC’s Vacation Bible School where many children and adults put in a stitch. The quilt top and embroidery were stitched by Marilee Roethemeyer, church member and wife of former pastor, Sam Roethemeyer. Calligraphy on the top panel, 2017 Emanuel United Church of Christ was designed by anniversary class confirmand, Hannah Shinn; artistic reproduction of the church building by Robert Friedrich III; binding was attached by Valeria Tuschhoff.

The children’s hands were quilted on the lowest panel. The all dedicated the quilt by laying their hands on it and each other during the anniversary church service.

Rev. Fred Brandenburg, who served EUCC from 1966 to 1974, was present with his wife, Shelly. He reminisced and spoke on the power of the congregation’s loving influence when they received a baby quilt for their son Seth.

“Never underestimate your loving power,” said Brandenburg. Before he could pronounce the word blanket it was called “wee,” and was always referred to that way. Seth died at age 24.

“Growing up, that blanket gave him comfort throughout his life Even through his sickness — when it was in tatters. You all in your spirit went with him. This is just one example of the love shared, the tapestry of love through sharing and caring.”

Brandenburg told another story — it was one of the greatest memories — about baling hay with church members and how hot and sticky it was in the fields. The group decided to take a swim at the creek. “We swam as we wished. It felt so good,” he said.

Regarding Pastor Sam Roethemeyer’s honor as Pastor Emeritus, Pastor Rowley said, “Although the relationship has changed he is still important to the church’s identity and ministry. The title celebrates his legacy of making the church what it is today and continues to live out and build upon that.”

Roethemeyer brought greetings and congratulations on EUCC’s 150th anniversary from other churches and the Jackson Ministerial Alliance.

“I had big shoes to fill even though Fred was a couple of pastors before me. I was fortunate to be here for the 125th anniversary,” said Roethemeyer.

He recalled how Friday the 13th was a lucky day for him as it was the day he was contacted by the church’s search committee responsible for hiring him as pastor in 1988.

“What a history of beautiful ministry we have. Many children’s story sermons—you never know they will say or do—Heifer project, VBS—an odd, crazy thing…who knows what I was in but that’s OK. I got to know a lot of people and families when serving in hospitals and nursing homes.”

“I got to do all three of my children’s weddings, then all seven grandchildren’s baptisms. Thanks to Pastor Mindy to do our last grandchild and Joe to confirm our oldest grandchild,” said Roethemeyer.

Roethemeyer proudly remarked on the involvement of his family and that of his son and daughter in laws coming into his family, with the church.

His most special sentiments he saved for last, “Without Marilee’s partnership…she put up with a lot of calls and times away and shared the most beautiful times of our lives. Here we became a family.”

With regard to church secretary Margaret Puchbauer, who served 43 years, he said, “She kept the sun shining even on a cloudy day.”

“Fred was just carrying the torch that carried the light for 150 years — going back to Kies. We say we’re passing the light of preaching and teaching. So happy you’re here (directed at Rowley).”

Jason St. John, Council President, also Roethemeyer’s son-in-law, said, “He knew each member, called us on our birthdays, made endless trips to hospitals, was president of the Jackson Ministerial Alliance, provided blessings at Jackson football games, performed weddings for members and non-members and brought biblical characters alive, especially during Lent. He put his family and church family first.”

At the conclusion of the church service, a congregational group photo was taken and everyone reunited for the luncheon and program downstairs.

LaDonia Beggs, a member since 1934 when she was baptized, recalled how EUCC had significant meaning to her and her family.

“My aunt, Minnie Bock Schloss, who was instrumental in the beginner’s department, was my first memory of Sunday school attendance. I was probably three. Life went on and I became a Sunday school teacher of first to second graders for 59 years. I remember teaching with Miss Clara Friedrich and Ruth Brugger and Miss Helena Hoffmann. Memories of choir were very special,” she said.

Scott Beggs’ happy memories included camping with the church youth group in Colorado about 40 years ago. “We hiked for four days and three nights. It took us four days to get up Mount Keller and 45 minutes to get down,” he said.

Very special to her was, “The joy of being here under the guidance of my parents and striving to help my children be in tune with the Lord.”

“It (EUCC) is the most supportive addition to your own personal family when things are good. When you go through the shadows there are prayers. You know everybody’s praying. They’re there to celebrate wonderful times. I can’t imagine being anywhere else. This loving and supportive family. It means a lot to me to have a relationship like this with other Christian families.

At the conclusion of the luncheon a PowerPoint presentation was shown and narrated by several church members. A commemorative history booklet was given to each family as a gift.