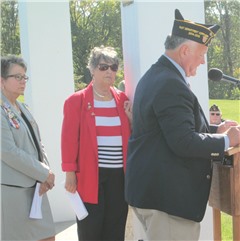 While children played baseball at the Brookside Memorial Park field, a more somber event took place nearby. The children’s freedom — contingent upon the sacrifices of all the veterans names etched on the nearby war memorial, plus many more — was evident in their cheers.

The memorial wall’s Vietnam War section includes nine panels of names etched in stone. A larger font marks the dates, 1964-1973, of a war that began over 50 years ago. Jackson Mayor Dwain Hahs briefly spoke on how the Vietnam War was, “an important part of our nation’s history.” He thanked the Daughters of the American Revolution, John Guild chapter for implementing the commemorative service designating that five decades have passed since the start of the Vietnam War.

Hitt gave credit to Carla Jordan and Julie Nelson for compiling the list.

Dennis Woeltje, past department commander of the American Legion, spoke on the history of the Vietnam War, highlighting that 11,000 women—nearly all volunteers — served in the Vietnam War. Women also served as physicians, air traffic controllers and in other professional positions as well. He provided Marti Strickland, local regent of the John Guild Chapter of the Daughters of the Revolution, with pictures of monuments to women who served in Vietnam at the National Mall in Washington, D.C.

The number of U.S. soldiers deployed in the Vietnam War — close to the population of the city of Chicago—is 2,594,000. Of that number, 58,220 were casualties; 1,411 of those casualties were from Missouri, said Woeltje.

“The average age of a soldier in the Vietnam War was 22, not 18 or 19,” said Woeltje. Proudly, 97 percent of veterans were discharged honorably and 66 percent voluntarily signed up.

In conclusion, Woeltje said, “The Vietnam War was and is controversial. Those who served deserve our undying thanks and honor. If you see a Vietnam veteran tell them thanks and welcome home.”

Strickland, who mentioned the service also coincided with the national DAR’s 125th anniversary, said she hoped the service would bring comfort to Vietnam War veterans and their families. Veterans in attendance were then asked for to come forward for a commemorative pin.

Taps was played at the end of the ceremony.