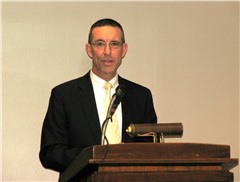 The Community Caring Council celebrated its 2017 accomplishments and 29 years of helping the most vulnerable in the community at its annual breakfast April 20 at the Show Me Center in Cape Girardeau.

Steve Corsi, director of the Missouri Division of Social Services (DSS), was the keynote speaker.

“Our department ties in very nicely with the mission of the Community Caring Council,” Corsi said.

Corsi is formerly from Wyoming. “One of the exciting things about Missouri is community partnerships. We didn’t have partnerships like this in Wyoming,” he said.

Corsi summarized the work his department has done over the past year.

Child Support collected $870 million in child support, mostly from fathers. Corsi believes all fathers should be willing to support their children. “Every father was involved at the point of conception,” he said.

Corsi has five main goals for his department:

1. Move families to work or back to work.

3. Redesign the child welfare system. “We need to develop an entirely new system, not just tweak it,” he said. “If you want to help us, we’d love to have your thoughts and your wisdom.”

5. Revitalize the depart-ment’s organizational infrastructure. DSS has four big computer systems which were “the latest technology money can buy in 1978,” Corsi said. Just replacing one of those systems could cost $450 million. “That’s pretty big stuff,” he said. He wondered if there might be some other way to improve the system without such a big cash outlay, such as a partnership with businesses.

The Community Caring Council was founded in 1989 by Mary Kasten, a former member of the Cape Girardeau School Board who left after 20 years when she was elected to the Missouri State House of representatives.

“I’ve known Mary for years,” said newly elected Cape Girardeau Mayor Bob Fox. “There is not a woman who has given more to the City of Cape Girardeau than Mary Kasten.

That Friday was the Optimist Students in Government day, so Fox had his student mayor, Alyssa Davis, read a proclamation from the City praising Kasten, before it was presented to her.

State Rep. Kathy Swan then presented a House resolution to Kasten. Kasten also received a Senate resolution sponsored by State Sen. Wayne Wallingford, although the senator was unable to attend.

Kasten said she was “so humbled and so grateful” to receive the recognition.

The Horizon Award, given to an individual or group who has given extraordinary service to the Council in a specific area, went to “Father Rick” L. Jones of St. Vincent de Paul Church. More than 500 households were helped by the church’s service projects.

The Community Partnership Award, given to recognize an individual, business, group or organization that has rendered exceptional outreach and / or engagement with the community through partnership with the Community Caring Council, went to Jack Ford of Cape Girardeau Slumberland Furniture, who donated more than 300 beds to children in the community since 2012.