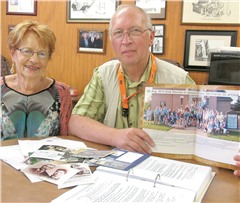 When the Bock family held its annual reunion on Aug. 5 of this year, a special guest attended — Eike Bock from the small German town of Berel.

Eike has spent the past eight years researching the Bock family history and has gathered information on 24 generations from 1334 to the present. Many currently live in this area.

The story begins with Heinrich Bock, Sr., who was born in 1334. Around 1384, he was the administrator of Asse Castle, a castle built between 1218 and 1223 near the town of Wittmar in Germany.

Costly wars and rising taxes (in part, to pay for those wars) forced Heinrich Bock, Sr. to move to other nearby towns. He settled eventually in Immenrode, where the family remained for about 100 years.

Another Heinrich Bock (who was born in 1505 in Immenrode) had two sons; Heinrich (born in 1531) and Tiele (born in 1533). The family history continues through Tiele.

The Thirty Years War (1618-1648) began as a conflict between Catholic and Protestant states in the fragmented Holy Roman Empire. There were 8 million casualties. Soldiers came to the Bock home demanding money and food. “After some time, the people have no money,” Eike said. “They flee to the forest.”

As Eike retraced the history of his family, he searched that area of Germany, and finally found the family name in a church book in Gep-hardshagen. Two years later, the family had moved to another town. The war came to an end and the family lived on a little farm. The children moved into neighboring villages. One son, Hans, moved to Berel, a town of 550 people. This is Eike’s home town, and  the town from which the Bocks in the U.S. originated.

In 1824, Johann Heinrich Levin Bock left Berel for the U.S. Most people who left for America at that time left from the German port of Bremer-haven. Johann traveled to Bremerhaven but was not allowed to leave because he had no military service. He then traveled down the coast to the French port of Le Havre, where he was allowed to depart for the U.S.

Eike found a record of Johann arriving at Ellis Island in New York in the autumn of 1845.

Six months later, Johann bought 40 acres near Tilsit for 80¢ an acre. In 1899, he died on the property that became Larry Bock’s farm. Eike has a photo of Larry Bock kneeling beside Johann’s tombstone.

Johann Bock was one of 106 residents of Berel who left for America in a 25-year period. Some were neighbors in Berel, and once they settled in the U.S., they were neighbors again in Missouri. Last names included the Lorbergs and Vogels.

Why did Johann Bock leave Berel for Tilsit? “There was more space in America,” Eike said. In Germany, Johann was a shoemaker. He lived on one acre of land. After Johann settled on his 40-acre farm in Tilsit, his father sold the rest of the farm in Germany, moved here, and also bought land in this area.

“Fifty people from my family go to America,” Eike said.

Eike is continuing to research where the Bock family has gone. During his 19-day visit to America this summer, he searched for Bocks who migrated from Missouri to Kansas and Nebraska.

He visits with his distant relatives when he finds them, and he gets copies of family pictures that he adds to his books.

Eike has compiled a 550-page book telling his family history, and a smaller full-color photo book that has photos of most of the 24 generations of relatives whom he has found. The photo book contains the names, birth dates, death dates  and photos.

“There are so many that have have the same name,” Eike said. “It’s nice to have a picture with it.”

Eike began this project in 2009. In the past eight years he has found 5,278 descendants of Heinrich Bock, Sr., About 3,000 of them were born in America, with most of them having lived around Jackson.