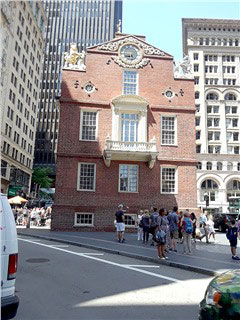 Beginning at Faneuil Hall in Boston, MA, a group of about 12
met at the bronze Samuel Adams statue for a Boston by Foot Freedom Trail
walking tour.

Built in 1742, Faneuil Hall was later enlarged in 1806.
Volunteer guide Frank Vincent, a native Bostonian, explained that due to
restoration, the hall was covered in blue tarps. Despite that, informative
tourist areas on the bottom floors were still accessible. Many historic
protests against taxation were contained within the walls of the hall. Today
the space is used for public functions such as graduations.

Vincent pointed to horizontal lines on the concrete around
the Hall that spread to places unseen. “These lines represent where Boston’s
shore used to be. They started filling it in during the 1600s and didn’t finish
until the 1900s. A large part of Boston is manmade; about two-thirds of it,” he
said.

The next stop on the walking tour was the Old State House at
Washington and State Street.

Built in 1713, it was the seat of Massachusetts General
Court until 1798. On the ground there are 13 cobblestones arranged in a circle,
and a center stone marked with a star to commemorate the Boston Massacre on
March 5, 1770.

The Old State House is an eye catcher with its gleaming gold
lion and shiny platinum unicorn with gold detail placed at the top corners.
Both the lion and unicorn, comprised of wood, were burned down on the street in
the 1700s because they represented royal authority.

“The inside of the crown unscrewed and they found a time
capsule with newspapers inside,” said Vincent. “Of course when they rebuilt it
another time capsule was included.”

“No king or queen ever visited Boston until 1976 when the
Queen of England came,” said Vincent. Of course her tour included Freedom
Trail. Queen Elizabeth’s picture was in the local newspaper the next day.
Behind her picture, the words “All is forgiven,” appeared.

Across from the Old State House on Congress and State
Streets is the Bank of America building. The space is the site of the Boston
Massacre. The incident was described by the British as a confrontation in which
British soldiers shot and killed several people while being harassed by a mob
in Boston. Vincent said five Americans were killed in the horrid massacre and
implied the incident may have been avoided if a musket had not accidentaly
discharged.

Nearby, on a freestanding display, a copy of the Boston
Massacre poster, engraved by Paul Revere, is posted.

“This is the first example of propaganda in American
history,” said Vincent.

The next stop on the tour was the Old South Meeting House,
at the corner of Washington and Milk Street. It was built in 1729 as a Puritan
house of worship. It was the largest building in colonial Boston and also
served as a place for citizens to gather and challenge events that led to
America’s independence.

Among the protests against British rule were the Boston
Massacre and tea tax. The Boston Tea Party was launched from this spot by
Samuel Adams and followers who refused to pay the tea tax. They were also
concerned with monopolization according to Vincent.

Old City Hall at 45 School Street, next on Freedom Trail,
was built between 1862 and 1865. It was home to the city council from
1865-1969. Its impressive ornamental columns and long arched windows seemed to
tower above the group as Vincent told a colorful story of James Michael Curley,
the mayor of Boston from 1946 to 1950.

“Known as the rascal king, Curley was imprisoned for taking
a postal test for a friend. He explained to the public that he was helping a
friend,” said Vincent. “Every holiday, gift baskets would arrive lined with
white envelopes. Only the mayor knew what was in them, but it wasn’t hard to
guess the contents.”

Kings Chapel, our last stop, is located at the corner
Tremont and School Street. It was built between 1749 and 1754. A public burying
ground is on the same property. It is the oldest graveyard in the city and is
not affiliated with the Chapel. The remains of John Winthrop, first governor of
the Massachusetts Bay Colony, is buried there.

The above sites are all part of Boston’s Freedom Trail.
In this article: