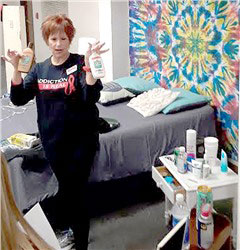 Addiction is Real, a non-profit organization based in St. Louis, held an educational program at the Osage Centre in Cape Girardeau Thursday night to help parents protect their children and educate them about drugs and alcohol.

The crowd stood around a set depicting the average teenage bedroom while Teri Douglas, vice-president of the organization, identified item after item and explained how it hid drugs or alcohol or was used in administration.

“Check for bite marks on a phone cord, belt, shoelaces,” said Douglas, as she explained how they were used tourniquet fashion to prepare drug users to shoot up.

Two critical messages sent to the audience included just how dangerous it was to think that your child would never use drugs or alcohol and just how important it is to practice refusal skills with your kids.

According to the 2016 Missouri Student Survey, talking to your kids regularly about the dangers of drugs and alcohol can reduce their chances of using them by 42 percent. That’s the good news. The bad news is that only one in four teens report having these conversations, leaving 75 percent of teens uninformed, according to the Center for Parenting Ed.

Causes of addiction may link back to family history, but ordinary risk factors like bullying, less parental involvement, trauma/abuse, problems with impulse control and legalization of marijuana can also play pivotal roles. Treating these issues so that children don’t find ways to self-medicate was talked about in the presentation.

Another topic presented was the importance of the disposal of prescription drugs. Taking various drugs from home medicine cabinets and pooling them together, often called a “Pharm Party,” is still an activity practiced by teens. Drop off locations to discard drugs include the Cape Girardeau Police Department, Cape Girardeau Sheriff’s Department, Jackson Police Department and Southeast Missouri State University Department of Public Safety.

Keeping drugs locked up was advised.

Douglas took to the podium after half an hour of demonstrating and answering questions at the hands on “Hidden in Plain View” display of a teen bedroom. “I’m surprised by the crowd here tonight. What a concerned community this is coming out to learn about keeping kids safe and alive. It gives me goosebumps. We are a group of volunteers who try to educate on the signs and symptoms of substance use so that people become aware of what is hidden.”

Spotting atypical behavior including lack of proper hygiene, frequent illness or appetite changes are warning signs; even clothing can indicate there might be drug use going on. Besides having hidden seams or pockets, some of the clothing with logos or graphics that might otherwise seem foreign can actually be the drug dealer’s trademark.

Ordinary soda cans with the bottom cut out are used to cook drugs for intravenous use. The rim of a hat or inside tag can be used to conceal drugs. Apparel brands such as Seedless, sell hats with built-in stash pockets.

For interested individual unable to attend the event, there is a “Hidden in Plain View,” virtual for viewing at www.addictionisreal.org/HIPV.

Pam Greenberg, Addiction is Real president, told the group, “For the same reasons you get them vaccinated, you talk to them about drugs to protect them. By the time they are in third or fourth grade they are already setting expectations of whether they will consume alcohol or refrain from doing so. There’s that uncle that always gets drunk at family parties and everybody laughs. From this they pick up signals that support whether this as a natural way of living or not.”

“Just like having the sex talk, you have to have the drug talk,” said Greenberg. “And if you suspect drug use, you should stop the world and get to the bottom of it.”

Surprisingly, two thirds of youth age 13 to 17 say losing their parents’ respect and pride is one of the main reasons they don’t smoke marijuana or use other drugs, according to the Office of National Drug Control Policy.

Practicing refusal skills with children might include friendly responses like, “Thanks for offering. I’m good,” or “Let’s just hang out instead,” or “I have to go to my brother’s basketball game. See you another time,” or “my parents drug test me.

Greenberg told the story of a colleague who came up with a plan for her middle school children. She told them she did not suspect they were using drugs but that she wanted to drug test them just so they could honestly say their parents drug tested them.

Greenberg lost her son, Justin on Feb. 27, 2015, to an accidental overdose of heroin. She wants everyone to know that the three most dangerous words a parent can think or say are “Not my child!”

Another “Hidden in Plain View” event will be held May 4 in Sikeston. Contact Addiction is Real for details, which are not yet determined.