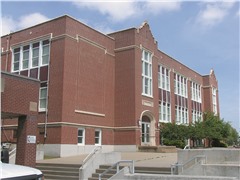 Current plans for Jackson High School call for the demolition of the original high school building — the “A” Building — and the construction of a brand new freshman center in its place.

Why destroy this historic structure that has been part of Jackson for nearly a century? Why not keep what’s there and renovate it?

That option was explored by the Jackson R-2 Board of Education Feb. 14 and was rejected. Here’s why.

Restoring the “A” Building has the following challenges:

• Potential replacement of the roof framing at the media center to bring it up to code.

• Modification of existing stairs (they are too narrow).

• Entirely new electrical, mechanical and plumbing systems, plus the addition of fire sprinklers.

• Replacement of all exterior window systems.

• Remediation of all asbestos. (Some of this has been done in the past, but Aaron Harte of Incite Design Studio believes there is more to be done.)

• Diagnosis and reme-diation of environmental hazards (such as mold) and water infiltration (water has seeped through walls, causing paint to peel and other problems).

• Full renovation to bring the facility to today’s standards for learning environments and building code.

• The 2015 Building Code will require storm shelters, but this is not an option with a restored “A” Building.

• Seismic (earthquake) improvements are not possible with existing construction.

• Smaller classroom sizes will result in a lower student-to-classroom ratio, thus resulting in more classrooms to house the student population, and the need to hire additional teachers (a cost that would continue every year).

• The addition of any new program or flex space cannot be accommodated in the existing building footprint.

At least two of the seven Board members were hesitant to demolish the historical structure, but in the end they all voted on Feb. 14 for a new building, giving these reasons:

“I lean toward taking the building down and do a new building,” began Dr. T. Wayne Lewis. “I look at the long-term cost.” The old structure has smaller classroom sizes. To fit the ninth graders into the smaller classrooms would require more classrooms, and require the hiring of five teachers for those extra classrooms. That would add an annual cost to teacher salaries of about $250,000.  “That’s one of the biggies,” Lewis said.

Kelly Waller said based upon the presentation that night, it was time to tear down the “A” Building and replace it with a new structure. He reminded the Board that the old “C” Building was kept intact and the new high school was wrapped around it. He said those teachers in those old classrooms would probably prefer to have new, modern classrooms, as their coworkers have in the rest of the building. Waller has children who will be attending the freshman center in the future, and he would prefer they go to a state-of-the-art freshman center instead of a renovated hundred-year-old building.

Sheila King said she had toured the “A” Building the day before and it was in worse condition than she had expected. “I know from my real estate experience, you buy something old and you want to get it fixed up, and you run into problems. One thing leads to another.”

Bruce Thomas said he thought about the people who elected him to that position and what their wishes were. “I wanted everybody to be heard.” He said he would like to keep the front of the “A” Building intact and construct a whole new building behind the façade. It would then have the appearance of the old building from the street but would be new inside.

Dan Stover was out of town that night, but Tomlin said she had asked him his opinion and he was in favor of tearing down the “A” Building.

The old “A” Building may end up demolished, but it will not be forgotten. “We’ll find some way to memorialize the old building,” promised Harte.