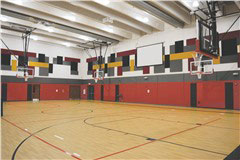 The Jackson R-2 West Lane Elementary Community Safe Room has been
completed and will now be used in the event of a tornado or dangerous high wind
events in Jackson.

The safe room is designed to withstand 250 mph winds and can hold
up to 2,485 people.

The School District held an open house of the West Lane Elementary
School on Monday, Sept. 16, where community members could see the new shelter
and other renovations throughout the school. Tours of the school were led by
current West Lane students.

The shelter includes a new gymnasium, art and music classrooms and
a kindergarten “pod.” The pod consists of four new kindergarten classrooms that
are connected by a communal area that can be used by any of the classes.

In the event of a tornado warning during school hours of 7:30 a.m.
to 3:30 p.m., the safe room will be primarily used to provide protection for
students and staff at both West Lane and the nearby junior high.

The half-mile radius for shelter was chosen due to the estimated
time necessary to reach the school after a warning is given and the maximum
capacity of the safe room.

“The front doors will be open during a tornado warning during
school hours and staff members will direct you on where you need to go,”
Assistant Superintendent Keenan Kinder explained at the open house.

After school hours, the doors leading directly to the new gymnasium
will be open for community members. Kinder added that the safe room has an air
flow system, so those shelter should be comfortable even if the power goes out.
“Fresh air will keep coming through even if we don’t have power, air
conditioning or heat,” he said.

Kinder said the opening of the safe room will be announced on the
District’s Facebook page, as well as on the District’s Web site.

Those who have special needs (physical impairments, special medical
alerts or aid animals) while sheltered at the safe room are requested to fill
out a form available on the District’s Web site as soon as possible.

The West Lane renovations were funded by a $3 million grant from
the Federal Emergency Management Agency and the $22 million Proposition J bond
issue approved by voters in April 2017. The open house marked the completion of
the Proposition J-funded projects, which also included additions at the high
school, middle school and North Elementary.

Renovations at West Lane outside of the shelter include a new
library, a new main office and a renovated pod of four classrooms that are now
used by first grade teachers. In addition, traffic issues were addressed with a
new student pickup area added.