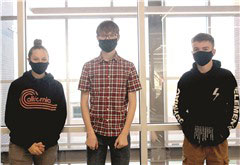 Jackson High School students Mallorie Coffee, Eli Jones and Tate Friedrich were selected by Science Coach, a program of BioSTL, to receive a $1,000 stipend to complete high-level research projects during their senior year.

The Jackson High School students won 100% of the awards, sweeping the multi-state competition. The students, all of which are taught by Leanne Thele, competed with students in Missouri, Illinois, New Mexico and Kansas.

Thele said the competition had never before had all three winners come from one school. “I’m very proud of them because there was a lot of applicants, even more applicants from Jackson, and they got all three top spots,” she said.

The senior stipend completion was created by Science Coach to inspire science students to continue doing research in their senior year, and allow the winners to complete high-level research that can help them win college scholarships.

As a science teacher, Thele joined Science Coach last year. She said the program helps teachers get research started in their home schools. “We have limited resources, so they help us with supplies, getting benefactors and help with logistics,” she said.

Coffee said the stipends will be invaluable in buying supplies to help their projects move on to the next level, but it will also help them realize that others in the science field believe in their research. “This stuff is hard, it’s exhausting and it’s time consuming, but to know that someone believes in us enough to support us financially means a lot,” she said.

All three students are continuing projects they started last year. Coffee’s research aims to solve one of the world’s biggest problems — antibiotic resistance. Last year, Coffee discovered that the negative signaling chemical N-Hexanoyl-DLHomo-serine Lactone interrupts communication in Streptococcus Pyogenes. This prevents the pathogen from ever releasing its toxins and people never become symptomatic.

Coffee said her research could allow us to coexist with bacteria, and it could be an alternate treatment to antibiotics. This year, she is focusing on seeing if the chemical N-Hexanoyl-DLHomoserine Lactone is compatible with the human body.

“I’m taking a cell line from the pharynx region, which is the throat, and I am going to see how much of this chemical the cell line can contain without the cell line dying,” Coffee said. She said she would also like to infect the cell line with strep throat to see how the three components react together.

“We already know when they interact with each other, they make you sick,” Coffee said. “I want to see if that chemical will be able to fight off that bacteria without harming the cell line.”

Coffee said the stipend will help her buy the chemicals and cell lines needed for her research, as well as the equipment needed to keep the cell line alive during experimentation.

Jones is working on a low-cost method to synthesize over 16 different natural products that have been extracted by plants. Jones said these molecules have the potential to be used to create vital drugs for cancer to HIV that are currently cost-prohibited to being mass-produced.

Last year, Jones focused on synthesizing just one of the natural products. This year, he is planning on beginning his research on a novel stereoselective phloroglucinol alkylation — trying to make both the “right” and “left” hand versions of the molecule, a major challenge in modern organic chemistry.

He said the stipend will be used to buy expensive metals that are needed as a catalyst for the chemical reactions. “I’m hoping to develop this reaction quite a bit because it might allow us to start preparing this drug industrially or use it as medicine,” Jones said.

Friedrich will continue his engineering research of developing a small scale Ionocraft, an aircraft that uses electric currents to produce thrust through electrohydro-dynamics. He said Ionocrafts don’t produce any greenhouse gases, are highly efficient and completely silent.

“I hope to build a functioning prototype that can be mass produced,” Friedrich said. “Theoretically speaking, the Ionocraft I have planned could change the world. It could revolutionize travel and have multiple different military and civilian applications.” He said it could be used for drones and could be scaled up to a jet engine.

Last year, he focused in creating the most efficient setup for an Ionocraft and will be able to use the stipend to create prototypes this year. He said he will try several designs to create a small-unmanned aircraft capable of lifting small data-collecting instruments, packages or cameras.

“Every STEM career that we are trying to lead these kids to requires them to have lab skills, so my goal as a teacher is to expand our program to where we are doing hands-on learning in the classroom and lead these students outside of the structured curriculum,” Thele said.

Thele said these students have been able to truly practice science, which is something she aims to help all her students at Jackson High School do.

“We are trying to get them in a lab and get them learning the skills they can take into the world and use.” Thele said. “All these projects can go to college with them.”