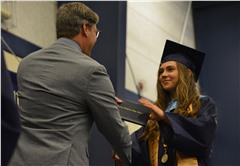 The 59 graduates had a average composite ACT score of 22.9, nearly three points higher than the state average.

In addition, 40 of the students earned a combined 404 college credit hours in 126 courses.

The valedictorians spoke about their high school experience, comparing it to a relay race. They spoke about the beginning and end of the journey, the encouragement they have received, the challenges they’ve faced and staying on the path.

Retiring faculty member Larry Cleair gave the commencement address, telling the graduating class to share the gospel and channel Jesus in their actions.