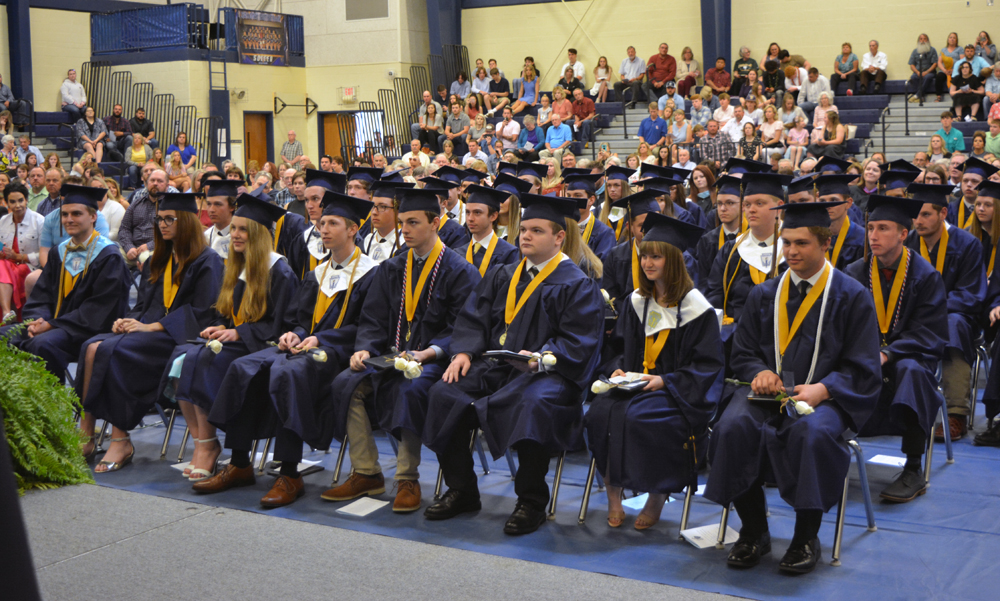 Saxony Lutheran High School held its graduation on Sunday, May 16, in the Gerhard Birk Gymnasium. Photos by Jay Forness

“This class has been remarkable and has shown a perseverance unlike any class I have seen in my administrative career,” Principal Mark Ruark said.

Ruark added that the class was determined to have as normal a senior year as possible, with their faith in God helping them reach this day. The school was able to have face-to-face learning throughout the school year.

“This senior class has been through two school years that have been unlike any other school year, and they’ve had to face more adversity than most,” Ruark said.

Ruark said the class was very close-knit, leaning on each other during difficult times and working together to achieve their goals. “They are a great example of what it means to be a part of the Saxony family,” he said.

Saxony’s 19th graduating class had an average composite ACT score of 23.2, which is three points higher than the state and national average and was one of the highest composite scores in Missouri. 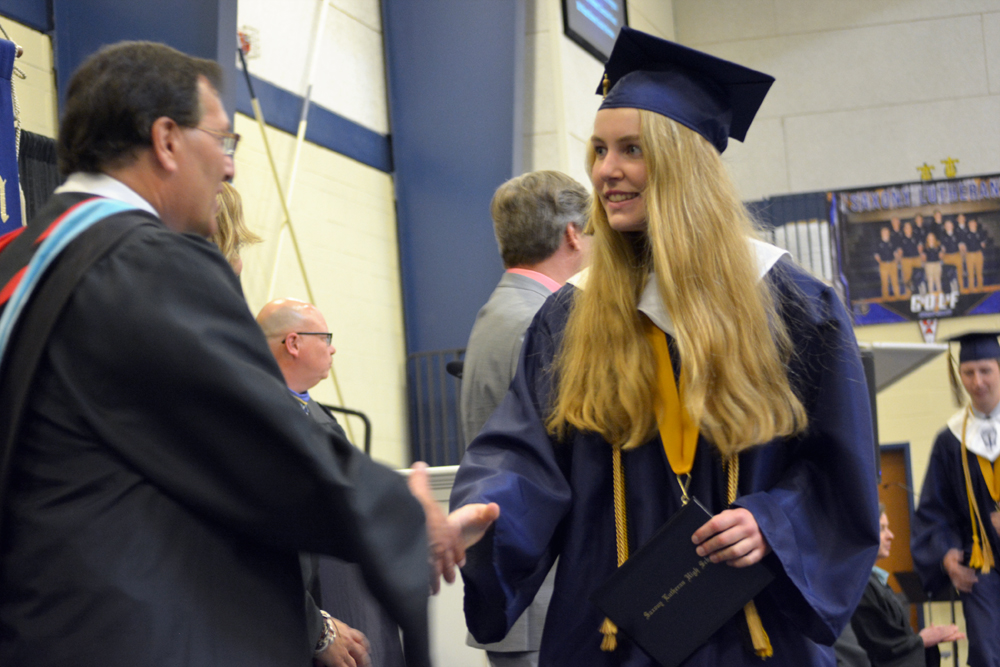 Graduate Megan Benkendorf was recognized at graduation for being a National Merit Scholar finalist and for being the first Saxony student to receive a perfect score on their ACT.

The graduates also had the highest percentage in the school’s history (85 percent) to receive a college scholarship. The scholarships earned and accepted by the class total over $1.1 million.

In addition, two-thirds of the class earned a combined 332 college credits. Over one-fourth of the graduates have already earned a full semester of college credit at the time of graduation.

Graduate Brock Engert was chosen as the student speaker and Becky Wichern, math teacher and recent Jackson Area Chamber of Commerce Educator of the Year winner, was chosen to give the commencement address.

Engert said his class, which was one of the smallest at Saxony with 47 students, had topped most other classes in school spirit and have formed strong connections with each other. “We all can look around and we wouldn’t be able to see someone we haven’t connected with,” he said.

He said the Class of 2021 was leaving behind a legacy of faith and kindness at Saxony. “I thank God for the opportunity to meet you all, and I thank you for four of the best years of my life,” Engert said.

Wichern shared her experience after graduation and how she wasn’t sure about her future. She spoke about how her choices led to her current ministry at Saxony, though it did not come together the way she first expected.

“The choices were mine based on the circumstances that were put in my way and together, a ministry was created,” Wichern said. “I can look back on the ways God directed my choices to create a life He now uses for His ministry.”

She used the mathematic “chaos game” to show how random points will slowly form a Sierpinski triangle. The final image looked orderly but was created through a chaotic method.

“You don’t have to stress about your choices,” Wichern said to the graduates, adding that the most important thing is that they keep playing the game and let God do the stressing.

During the ceremony, senior choir members were able to perform “Lean on Me” and “It’s a Great Day to be Alive” and the senior instrumental ensemble played “God Bless the U.S.A.” The 2021 class gift was outdoor speakers and PA system to be used at outdoor school events.