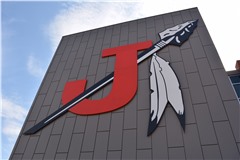 Jackson students will see many differences when school starts today (Aug. 22). Construction projects across the District, including the new “J Wing” at the high school, have been completed and are now ready for classes to start.

The new “J Wing” at the high school includes a new two-story commons area with built-in seating, study rooms and a digital café. Superintendent Dr. John Link said the area was designed to have a collegiate feel, where students can hang out before school and during lunch. The area also features the original archways from the old “A” Building and display areas that will house artifacts and pictures from the District’s past.

The J Wing added 19 classrooms, professional development rooms for the District and offices for administrators and staff. All the classrooms have carpeted floors, built-in cabinetry and smart board projectors. The addition also includes specially-designed classrooms for art, science, textiles and cooking. Link said the addition also opened up space throughout the high school, allowing other classrooms to be expanded.

The middle school saw an additional hallway added down the middle of the building, attached to the existing two wings. The addition added classrooms, a conference room, learning space for special needs students, a literary library, more lockers and much-needed restrooms. An additional gym is currently under construction and will be finished in October.

North Elementary, which has a new addition and completely renovated areas, includes new classrooms, new music and art rooms, a new library and a new front office. Renovated areas at West Lane Elementary are also completed, with only the FEMA shelter at the building still under construction. The shelter is scheduled to be completed by December, with the walls going up in the next few weeks.

“We hope that by December Prop J is a thing of the past and then we start looking at our next venture and next need, as enrollment continues to grow,” Link said. These additions have been able to maximize the buildings that the District already had before a entirely new building will be needed in the District, he added.

Other infrustructure changes across the District included improvements to the Agriculture and Industrial Technology building, new windows in the old gym at the high school, paved parking lots at Millersville and Gordonville, new turf fields for football and soccer, new track lights and a new canopy for bus pick up at East Elementary. The District also added new fencing at various locations and access controls at most school buildings.

Because of the additional space in the District, 26 new teaching positions were added. Due to the new positions and replacing former teachers, 48 new teachers were hired by the District.

Moving the freshmen to the high school also set off a ripple effect that moved seventh grade to the junior high, moved fifth grade to the middle school and changed most elementary schools in the District to have kindergarten through fourth grade.

“About 25 to 30 percent of our entire staff are in a new building or a new space,” Link said. He added that the staff is embracing the new beginning, and teachers who were initially apprehensive about the changes are now excited after seeing all the changes.

Link said they made 28 presentations to the community about their vision for the District and the changes they intended to make. Now, being able to see the vision come to life, Link said, “I really believe we under-promised and over-delivered.”

Community members will be able to see some of the additions themselves on Sunday, Aug. 26. The open house/ribbon cutting will start at the high school at 2 p.m., will continue at the middle school at 3 p.m. and will finish at North Elementary at 4 p.m.