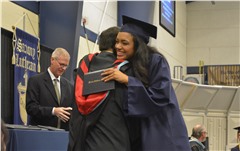 The largest-ever class of Saxony Lutheran High School graduated Sunday with 62 graduates. The school has now graduated over 500 students and has excelled in academics, athletics and activities.

The class of 2018 had an average cumulative ACT score of 23.5, over three points the state average, and 94 percent of the graduates will attend a college or university this fall.

Over 65 percent of the graduates received scholarships, totaling $1,384,754. The class exceeded the previous Saxony record for most scholarship money ever earned by a graduating class by over $330,000.

Over the past four years of Saxony athletics, the graduates competed in 28 district championship contests. Of those, Saxony won 18.

On Sunday, seven students shared the title of valedictorian, having all earned 4.0 GPAs and getting straight As all four years at Saxony. Emily Cates, Sophia Voss, Emma Robison, Londyn Lorenz, Nathan Hartmann, Ireland Smith and Jade Samanta gave valedictorian addresses throughout the ceremony to their fellow graduates and guests.

The Saxony Lutheran High School Band performed the opening and closing music, with the Chamber Choir performing “Until We Sing Again” during the ceremony. Senior choir members performed “This Time” by Darren Criss and the senior instrumental ensemble performed “All Star” by Smash Mouth.

Faculty member Laura Hayden gave the commencement address, telling the graduates they had already heard her best material. So instead she went through her common sayings, but with more life lessons attached.

Hayden told them to “hurry, scurry,” because time moves quickly, and to “walk at half that speed” because they need to not miss the moments on their journey. She told people to put down their phones and spend as much time as possible with the people they love.

Another of Hayden’s phrases, “walk safely,” meant that life is a precious gift from God and the graduates are now responsible for their own safety. She said “say something confidently and they will believe you no matter what.”

Hayden advised that it is important to stay confident in their faith, which will become harder when they are around people who don’t believe the same things as them.

The graduates will soon be spread out over 29 higher education institutions across the United States. Three graduates will be entering the military immediately after graduating and an additional two graduates plan to serve their country by completing an ROTC program.