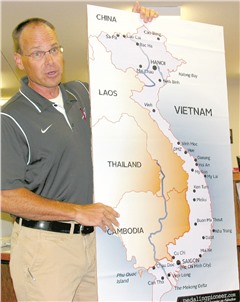 Middle school teacher Brad Haertling, the “peddling pioneer,” bicycled down Highway 1 in Vietnam this summer as part of a summer school class. He gave a presentation to the Jackson R-2 Board of Education Aug. 9.

Haertling first used his monicker when he rode his bicycle on the Oregon Trail for previous summer school classes. While making his trips, he reports to his class in Jackson using the Internet.

This past summer he bicycled 1,200 miles from Hanoi to Ho Chi Minh City (Saigon) in Vietnam.

He showed the Board videos of various products the Vietnamese set along the highway to dry in the sun.

On most days the temperature rose to 115°F, so he and his videographer, Danny Rees, bicycled from 5 to 11 a.m. and rested during the heat of the day. “We drank four gallons of water a day,” he said. He did not have to go to the bathroom, he explained to his students, because he lost that water through sweat.

Haertling doesn’t speak Vietnamese, and most of the people there did not speak English. He communicated mostly through sign language.

When asked if he felt safe, he said, “We took precautions. We did not go out after dark. In general, these people are wonderful.”

Haertling suffered from 12 flat tires on this trip, but that was fewer than the 19 he had on the Oregon Trail.

He chose Vietnam because he wanted to see Asia, and he had friends who were veterans of the Vietnam War.

He saw no cattle in Vietnam and said water buffalo were too valuable as work animals to be eaten. He avoided most dark meat, fearing it was dog, a staple for meat in that country. He admitted that he may have inadvertently consumed some canine because he couldn’t read the menus and some dishes came with dark meat on them.

Meals and lodging were inexpensive; a meal cost a dollar or two and a night’s stay, sometimes in rather nice hotels, was only $10-$12. The country is very poor; the average Vietnamese person earns about $1 a day.

He searched for signs of the Vietnam War but found none. “The war is gone. It’s just not there.” He said most Vietnamese have no memory of the war. More than half the population of the country is under 30 years old. Life expectancy is only about 60 years, and the war, which killed 3.5 million Vietnamese through 1975, ended more than 40 years ago.

Shanna Wilson, principal at Orchard Drive Elementary, discussed professional development at the elementary level. Every classroom has three goals; a district-wide goal to put students in charge of their learning, various building-wide goals and goals set by individual teachers. “Our plan is very student centered and teacher-led,” she said. “Our greatest resources are our teachers. We want to use the resources that we have.”

Janelle Pope, principal at the middle school, addressed professional development in her school. “Student engagement is our goal,” she said. “We want to have them thoroughly engaged.”

Technology also is a topic. “We want to help them (students) be real digital citizens,” Pope said. This includes showing students how to properly use social media and to be safe online.

Cory Crosnoe, principal at the junior high, said, “I could basically say ‘ditto’ and sit down.” Technology is a big thing as teachers were issued new Chromebooks this year. They are learning how to use them for the betterment of the students. Technology “has got us engaged to get the kids engaged,” he said.

Another aspect of professional development at the junior high is cross curricular literacy — getting students to read and “up their reading skills,” Crosnoe said.

Seth Harrell, principal at the senior high, said of professional development there, “Our goal is student engagement. We really don’t have a ton of new initiatives. We’re just fine-tuning what we have been doing.”

• Baseball field bids: Under recommendation of Dr. Link, the Board rejected all bids for work on the baseball field.

“I recommend you reject all bids. We’ll refocus and see what we can do for ourselves,” Link said.

• Bus routes: The bus routes for 2016-17 were approved. They were published in the Aug. 3 issue of The Cash-Book Journal.

Deckert announced that because assessed valuations were up, the District would receive an additional $720,000 in local taxes.

• MOSIP agreement: The Board approved a MOSIP Cooperative Agreement.

“Positive coaching is all about teaching and allowing athletes and teams to prepare better, perform better, achieve more, to experience personal excellence, and to be proud, happy, healthy and more fulfilled for their investment and efforts and motivated to come back and do more,” he said. “How do we do this? We do this by teaching, guiding, encouraging, building, believing, caring, sharing, giving, forgiving, expecting, respecting, modeling, serving and inspiring.”

• Parental notification: Merideth Pobst, director of communications, said parents may choose whether to receive notifications from the school via text or autocalls (automated voice telephone calls).

• Enrollment: Assistant Superintendent Dr. Beth Emmendorfer said the administration is monitoring enrollment. Kindergarten enrollment is consistent with last year. But in grades 1-7, enrollment is up at every level.

Second grade at North Elementary is already at 28 and first grade at South Elementary has reached capacity. No more students can be accepted in those grades at those schools. Additional students will be sent to Orchard Elementary. The numbers may change once school actually starts. Some students may be moved to other schools to reduce class sizes.

• Projects: Dr. Link updated the Board on building projects.

The roof at North Elementary is still two weeks away from completion. Rain delayed work this summer.

The Millersville Elementary renovation is complete. “It looks great,” he said.

The JHS football stadium “is coming along,” he reported. “We’ll be ready to go by the first home game.”

Next year, the top railing will be painted and work will be done on the north side of the stadium.

• Next meeting: The Jackson R-2 Board of Education meets regularly for open session at 7 p.m. on the second Tuesday of each month at 614 E. Adams, Jackson. The next regular meeting is scheduled for Tuesday, Sept. 13. There will be a tax hearing at 7 p.m. Tuesday, Aug. 23.