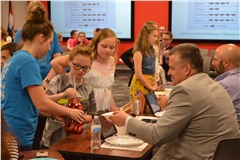 Paul Stoner and incumbent Brian Thompson took the oath of office at the Jackson R-2 Board of Education meeting on April 9. Stoner previously served on the School Board for three years. He replaced Dan Stover, who chose to retire from the board.

Stoner is the station manager at Cape Girardeau’s FedEx Express and has lived in Jackson for 15 years. His wife, Summer, works as a library assistant at the junior high, and they have two daughters who attend Jackson High School. Stoner said he felt in his heart it was time to get back involved with the Board. He said he joined to serve and contribute to the District.

The Board elected its officers, re-electing Kelly Waller as president and Thompson as vice president. Bonnie Stahlman will continue as secretary of the Board and Director of Finance Terry Gibson will serve as treasurer. Board Member Bruce Thomas will continue his role as the District’s delegate to the Missouri School Boards’ Association.

• The Board made a motion to move forward with Anthem for 2019-20 employee benefits. The District has been with Anthem for 18 years, but Superintendent John Link said this was a tough negotiation with the health insurance provider.

Link said that by staying with Anthem, no one’s coverage would change.

After an analysis by Director of Finance Terry Gibson, First State Community Bank and Southern Bank were seen as having the strongest bids. Gibson said the two bids stood out for having low interest rates and waiving fees.

Gibson advised to stay with First State Community Bank, due to the low bid and the exceptional customer service over the past five years with the District.

• Jackson choir students were recognized by the board for their participation in three national honor choirs sponsored by the American Choral Directors Association. The students auditioned in September and traveled to Kansas City to perform in late February.

• Elementary administrators Jessica Simmons and Dr. Lance McClard were congratulated by the Board for their recent awards from the Missouri Association of Elementary School Principals (MAESP).

• Third grade students and teachers from South Elementary shared some of the projects they did for global learning and engagement. Some of the projects included a lemonade stand to raise money for St. Jude, donate school supplies for a flooded school in the wake of Hurricane Harvey, writing letters to the Philippines, practice reading through a “review surgery” game, participate in a famous Missourian wax museum and exchanging postcards with people from other states.

A final project shared was a Fear Factor challenge, where they practiced math word problems in a team game. The students challenged the Board to play a few rounds, solving math questions and eating unusual food for bonus points. Board members ate used kitty litter, pig intestines, cow tongue and earthworms.

• Gloria Stoverink and Sarah Beussink spoke to the Board about a Health Index Grant they are seeking to raise health and wellness awareness at West Lane Elementary.

As part of the program, they have made the cafeteria more encouraging of healthy eating through kid-friendly decorations. If they receive the grant, they will also purchase Glo Germ gel to teach students how to wash their hands better.

• The Board approved continuing to have full maintenance service from the Missouri School Boards’ Association. As part of this service, the Board receives updated policies and procedures to comply with changes in state and federal law. MSBA also maintains an online version of district policies and provides legal review of forms at the request of the District.

• The Board approved a summer school application. The program will run 16 days, from June 4 to June 25. This year, the high school will be expanding virtual classes, adding virtual government classes in addition to the virtual health classes that started last summer.

• Construction at West Lane Elementary is nearly completed, with Link showing the Board photos of the completed gym, main office and classrooms.