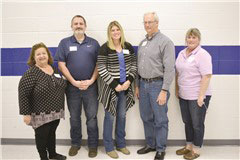 The Oak Ridge PTO hosted Meet the Candidates Night on March 5 for voters to hear from the candidates for the Oak Ridge R-6 School Board. Six candidates are running for three open seats on the Board.

Five of the six candidates were able to attend the event. Lindsay Berry, who was unavailable to attend due to work scheduling, provided a written statement that was read at the event.

Whitney McFall, Andrew (Andy) Seabaugh, incumbent Pat Hunt, Thomas Schreiner and Mary Seyer spoke to the audience and answered questions about the most important responsibility for a School Board member and if they could set aside their personal feelings and opinions when making decisions for the school.

McFall attended Oak Ridge as a student and later returned to Oak Ridge to coach volleyball for 13 years. She has three children in the District with her husband, Travis. She said they choose to live in Oak Ridge because of “the small-town atmosphere and a smaller school system.”

She said that she wants the Board to “not only support our teachers, but to create a culture that makes teaching safe and fun again.” McFall said the most important responsibility of a School Board member is to listen.

“We are a community,” she said. “The community and teachers like to have people listen to them – hear their ideas, hear what is happening in the school.”

McFall said that as a coach, she had to make tough decisions and even bench family members. While that doesn’t go over well on holidays, she said it was her responsibility to do what was best for the team as a whole. “The school is our team,” she said. “We have to do what is best for them.”

Seabaugh said he and his wife Kacey chose Oak Ridge to raise their children because of the family-like atmosphere. Their two children are now in high school at Oak Ridge. He decided to run after attending several Board meetings last year.

Seabaugh joked that he was the least-known candidate at the table and that most people in attendance knew him as Kacey’s husband. “I can call myself an outsider because I’m not a lifelong Oak Ridge resident, and I can tell you without a doubt that my number one priority is our kids and their success,” he said.

He said the most important responsibility for School Board members is to view every choice through an objective lens. Seabaugh said he would make decisions based on the overall mission of doing what is best for the children and the community.

“A good School Board member is not a machine,” Seabaugh said. “We have emotions and feelings, but the key is to not let those feelings and those emotions get caught up in our decision- making — our analysis.”

He said he has been a part of companies that have gone through tough times and had to let people go over the years. “I knew their life story, but sometimes business is business and you have to take care of what needs [to be] taken care of,” Seabaugh said.

Pat Hunt, who is seeking a second term on the School Board, is a retired public school teacher who moved into the Oak Ridge School District in 1997. She has two grandchildren currently in the District.

When Hunt was a teacher at Meadow Heights, she collaborated with teachers from Oak Ridge and other small schools in the area. “I really believe in the small-town, small-community schools,” she said. Twenty-two of Hunt’s 30 years of education experience was in smaller schools.

She added that education is important and student achievement — academically and emotionally — is her top priority. Hunt said School Board members have to find creative ways to help students succeed.

“I believe we have a great school here and I want to continue to be part of helping this community grow,” Hunt said. “We have challenges that are set that we don’t have a lot of control over, but we all have to work together to overcome the challenges that are presented to us.”

Thomas Schreiner, who is a lifetime resident of the Oak Ridge School District and served on the School Board from 2005 to 2014, is currently employed at the Jackson School District as the director of the technology.

He spoke about how the Oak Ridge schools have gone through tough times in their long history, but the people of this community have always supported the District. “People will pull together when times are tough and always remember – it’s darkest right before the light,” Schreiner said.

He said the major responsibility for School Board members is to make sure students receive a quality education. “In order to have a successful school and for kids to learn, we have to have quality teachers teaching those kids,” Schreiner said.

He said in order for teachers to be successful, they need to be supported and included in the decision-making process.

Schreiner said that by running for public office, he is there to do what the people say. He added that if you ask him a question about education, he either knows the answer or knows people he can ask.

Mary Seyer is a lifelong resident of Oak Ridge and graduated from ORHS in 1983. She is a retired teacher with 30 years as a junior high and high school math teacher. She retired from teaching in 2018, but continues to work at Walmart. “I’m not scared to work,” Seyer said

She said that although she has been around many schools over the years, Oak Ridge is special. “You go through the halls and the kids are talking,” Seyer said. She said it is special to see them know each other and not just be on their phones.

Seyer said school leaders have to do what is best for the majority of students, and she wants Oak Ridge to balance its budget and be “the best little school in the land.”

“Schools are a business, and our main product is our children,” Seyer said. “As a business, we need quality teachers.” Seyer said she is not scared to talk and likes when people come up to her with a question. She said she always has an answer, even if it isn’t the one they want to hear.

Berry is a 1997 graduate of Oak Ridge High School and a lifelong resident of the District. She has three children currently in the District with her husband, Dean. She is an admitting representative at Perry County Memorial Hospital and is a manager at Galati’s Restaurant in Perryville.

Berry, who has served on the Board in the past, said in her written statement that she can bring experience to the table. “Being a Board member means caring about each and every student and staff member in the District, and seeing that every opportunity that is reasonably presented is sought out for them to obtain,” she wrote.

The event was moderated by The Cash-Book Journal and was live-streamed on the PTO’s Facebook page. The School Board election is scheduled for April 7.