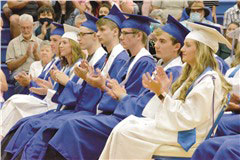 Oak Ridge High School celebrated the 32 seniors graduating as part of the Class of 2020 during its commencement ceremony on Saturday, June 20. The ceremony started at 7 p.m. in the school’s multipurpose gym.

Because of the governor’s Phase 2 reopening going into effect on June 16, the school opened up the graduation to community members after initially limiting attendance. The event was also live-streamed on the District’s Facebook page for those still unable to attend.

Superintendent Adrian Eftink called the graduates the class of persistence. “They constantly come to the call, do their best and work really hard,” he said. Eftink singled out the quiet persistence of Bonnie Lukefahar and the resolve of Trenton Beard, who is a cancer survivor. He also spoke about the members of the cross country team, who helped the school receive its first state title.

Layton thanked the teachers, families and friends that helped him and his classmates get to this moment in their lives. “Previous to this point in our lives, we all did – for the most part – the same thing,” he said. “We went to school every day for 12 years. From this point forward, we have so many different career paths.”

Layton challenged his classmates to pursue every opportunity that comes their way in life. “Whatever it is, cherish those moments and be grateful for them”

He said that when the COVID-19 outbreak came, their lives changed, and these last few months did not go the way they expected. Because of this, Layton said they should take chances to find their own version of success.

Hahs spoke about their high school experiences and the jokes they shared over the years. He said that although they missed out on their last two months together as a class, the time they had together was more impactful.

“I’ve had 14 years of memories at this school, many laughs and good times, so I’m not going to hang on to those last two months,” Hahs said. “Instead, I’m going to think of all those years where I got to spend eight hours a day, five days a week, with my friends.”

The Spirit of the Bluejay award, which is usually given out at the athletic banquet, was given to Zachary Le-Grand and Alexis Dillard. Several students were also recognized during the ceremony for various scholarships they have received.