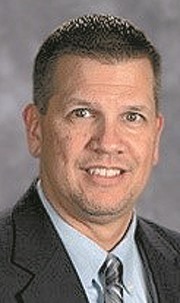 Jackson R-2’s new superintendent had been on the job just two weeks when he appeared at his first School Board meeting July 14.

“Thanks for hiring me,” he told the Board during informational items at the end of the meeting, “I appreciate your confidence in me.”

On Monday, July 6, he attended an ‘unconference’ in St. Louis for administrators and principals. “It was a good opportunity to listen to what other schools are doing,” he said. Jackson administrators led many of the discussions.

The finishing touches are being put on East Elementary. There are some issues with the HVAC system (heating and air conditioning) that need to be worked out. “We hope to have all the punch list things done before school starts,” Link told the Board.

“One of the things I’ve learned the last two weeks is that the maintenance department employees are hard workers,” he continued. They have had many projects to complete during the summer break. “The projects are starting to wind down,” he said.

Link then mentioned a new direction Jackson R-2 will be taking regarding social media. “We will soon have a District-level Facebook page and Twitter page. We have to meet people where they’re at, and right now they are on social media.”

In addition, the District will provide weekly e-news. “The coordination will be a little tough because there are so many activities,” he admitted.

Happy to be in the Jackson School District, Link concluded his comments with, “God moved me to the right place.”

• Board policies: The Board approved minor wording changes to six District policies as recommended by the Missouri School Boards Association.

In the District Wellness Program and Food Service Management policies, the words ‘or served’ were removed from paragraphs describing nutrition guidelines. Only food sold to students must meet U.S. Department of Agriculture standards; food donated by parents and served at student parties, etc., is not regulated by the policy.

Changes were made to the Board Member Conflict of Interest and Financial Disclosure policy to bring it in line with Senate Bill 719, which was passed in 2014.

The word ‘sick’ was removed from the phrase ‘accumulated sick leave’ in policies regarding sick leave pools for professional and certified staff.

A new policy regarding student speakers was adopted. It sets rules and guidelines for outside speakers who address students as well as for students who speak at school events.

• MOSIP: Jackson R-2 invests money in MOSIP (Missouri Securities Investment Program). Excess funds are invested until they are needed. The Board approved a resolution that replaces Dr. Ron Anderson’s name on the signature card with that of the new superintendent, Dr.  Link.

IT instructor Andy Stover described the District, Regional and State competitions for industrial technology students. “I’m real proud of everyone that went,” he said. He gave credit for the state honor to the students and their parents. “A lot of it goes to the parents and to the kids themselves,” he said.

• Transportation honors: Assistant Superintendent Dr. Beth Emmendorfer informed the Board that a team of three Jackson bus drivers placed first in a District competition. They are Lisa Russell, Brenda Harris, and Benny McDowell. Russell scored the second highest of the 32 participants and went to Minneapolis to participate in Nationals this past weekend.

• New teachers: Dr. Emmendorfer mentioned that new teachers would be starting their orientation Tuesday, Aug. 4. A breakfast will be held for them at 8 a.m. in the middle school.

A breakfast for all teachers will be at 8 a.m. Wednesday, Aug. 12, in the events center at the high school.

A support staff dinner is scheduled for 4 p.m. Wednesday, Aug. 5, at East Elementary. Staff will be recognized for their years of service.

• Next meeting: The Jackson R-2 Board of Education meets regularly at 7 p.m. on the second Tuesday of each month at 614 E. Adams, Jackson. The next meeting is scheduled for Tuesday, Aug. 11