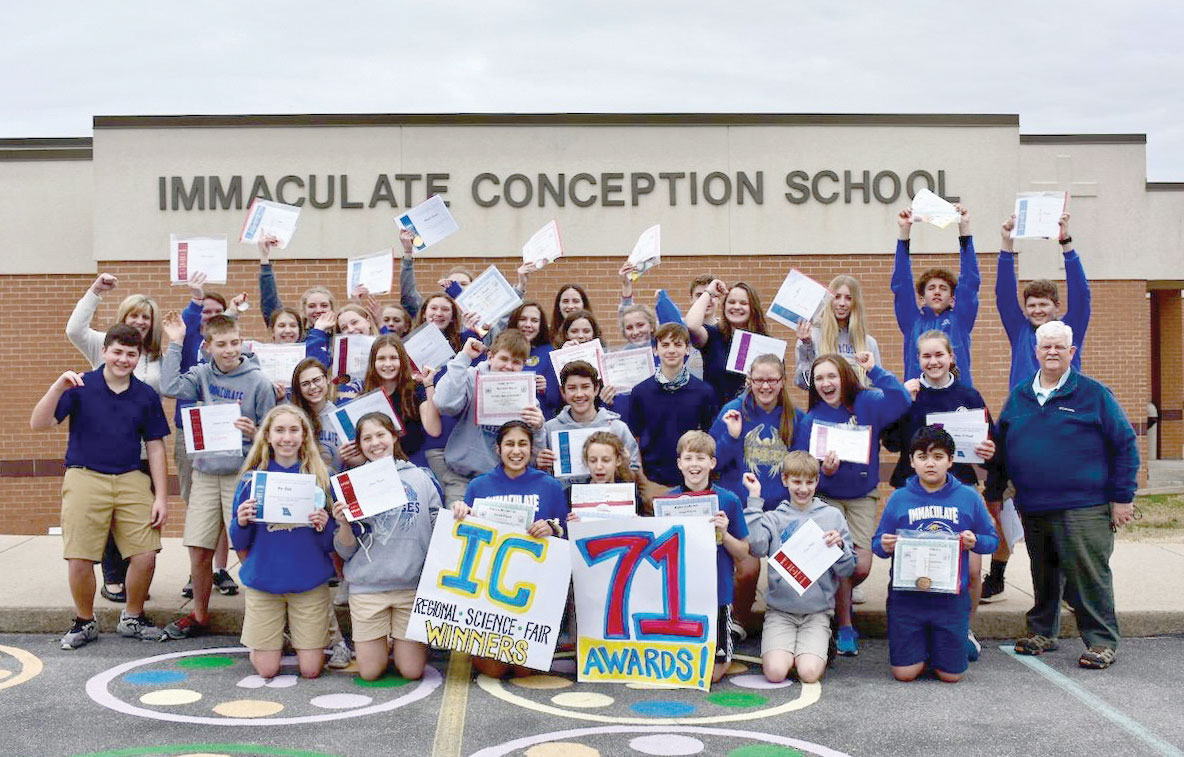 Although this year’s Regional Science Fair looked different this year, being a fully virtual event, Jackson area students continued to sweep the competition.

This year’s regional science fair was held virtually, with students submitting their research online. Instead of the traditional display board, students were required to submit a video discussing their project.

For seniors Coffee and Jones, the science fair allowed them to actually make it to the international fair after receiving the top award last year. ISEF was cancelled last year due to the COVID-19 pandemic, but will be held virtually this year.

Both Jackson High School students continued work on their projects from last year and are excited to be able to take their projects to the ISEF competition.

“It’s kind of a second chance,” Coffee said. “We still were published in their book of abstracts, but we didn’t get to compete at all last year. This year, it’s like a redemption to be able to go back and really compete with our research – which is now a step further and is stronger than it was.”

Jones, who was able to attend the event in person two years ago, said he will miss the face-to-face interactions, but is still excited to compete with this project for the first time at ISEF.

“I’m hoping that this year I get to talk to a lot of scientists,” Jones said. “Even if I don’t win any awards, I just love talking to people who are passionate about the same thing as me.”

Coffee’s project focuses on finding a way to treat pathogenic bacteria without using antibiotics. Last year, she was able to prove that the chemical N-Hexanoyl-L-homo-serine lactone was able to inhibit the growth of the bacterial infection strep throat (Streptococcus Pyogenes) and stop the bacteria from releasing toxins.

She said her research is moving towards a world where we are able to coexist with bacteria and stop it from getting us sick without the use of antibiotics, which leads to antibiotic-resistant “super bugs.”

Coffee expanded on her research over the past year to see if the chemical would be safe for use in humans. “At the end of the day, if it wasn’t safe and it caused harm to the cell line, then it wouldn’t be a viable option to continue to invest in,” she said.

She found that there were no changes between the cell line which had the chemical inserted and her control cell line.

“The cell line where we inserted the chemical was still reproducing and going through normal cellular functions at the pace that it should be, so the chemical in essence didn’t negatively affect the cell,” Coffee said.

Coffee said she would like to continue her work by testing if the chemical is safe using human cell lines from other areas in the body, as well as test how the chemical reacts to the combination of the human cells and bacteria such as strep.

Jones’ project consists of developing a way to synthesize the molecule of Lindbergin E, a drug that has been shown to combat the tropical disease Leishmaniasis, but is currently only found as a natural plant extract.

“Leishmaniasis currently affects over 12 million people in the subtropics, and it’s very undertreated because the current treatment options are just too expensive for these people to afford,” Jones said.

“It did take a full year to finish these five steps, but luckily I’m to the step right now where I have Fragment A and Fragment B,” Jones said. “I just have a few more steps to go, and I’ll finally have synthesized Lindbergin E for the first time.”

Jones said combining the two fragments requires a reaction that has never been performed before. “I’m trying to develop an organometallic catalysis to allow this process to happen,” he said. “Essentially this is a metal bound to a bunch of carbon atoms that can catalyze this specific reaction.”

He added that he will work on this new reaction in the coming months to hopefully have it ready by the international science fair. “If I’m able to develop this new synthesis for this molecule, then that can be immense because that opens the door to exploring over 15 different natural products that can’t be synthesized now because there’s just no way to do it,” Jones said.

“This is something I’ve been really dreaming about for a while now,” Parekh said. “It’s just such a great honor to be able to share my research with others at the national level, learn from other people’s research and just expanding my horizons.”

Parekh’s project involves developing a way to synthesize the molecule Pannokin D. Pannokin D is currently only found in nature, but was proven in 2014 to have anti-cancer properties against the cell lines that cause gastric cancer.

“No one has developed a way to synthesize Pannokin D before, even though it can be a useful tool for doctors for the treatment of stomach cancer,” Parekh said. “You don’t want to have to go out in nature to a sub-tropic region to extract the molecule from a plant. What you want to do is you want to make a accessible way to obtain the molecule, and so that’s why we’re synthesizing it.”

The first phase of his research was analyzing the structure and figuring out a way to break it down. He then created a schematic plan, which shows a step-by-step guide to synthesizing the molecule.

“My schematic plan is kind of like the blueprint for architects or a recipe for chefs on how to make my molecule in a laboratory setting using very simple starting materials,” Parekh said. “This creates an accessible way to make this molecule and obtain it in large quantities, making it cost effective to have the molecule and use it for treatment options.”

Parekh said he has spent a lot of time outside of class to learn more about organic chemistry, including auditing a class from Southeast Missouri State University Assistant Professor Sajan Silwal.

Parekh has already completed two steps of his seven-reaction plan, but he hopes to complete more steps before the international fair. He added that he will also research if there is any way to make his synthesis more efficient for mass production.

At the junior level, Immaculate Conception students Aidyn O’Daniel, Hailey Henderson, Libby Buchheit and Emmy Vandeven will move on to the state competition. At the senior level, JHS’s Eli Jones, Tate Friedrich, Lillian Hoffman and Graysen Johnston will move on, along with Saxony’s Hiren Parekh.

Friedrich, Hoffman and Johnston each said they were excited to move on to the state-level competition.

Friedrich’s project included testing for the optimal configuration and materials for an Ion-propelled aircraft, which uses electrohydrodynamics to provide lift and thrust in the air.

“There are no moving parts whatsoever, and they have the potential to revolutionize drones and civilian aircrafts,” Friedrich said, adding that they are silent and don’t wear down. He built a “test rig” of the aircraft, and tested the best emitter wire material for his project.

Hoffman’s project tested the effect of oxidative stress on the fertility of fruit glass. She said she hopes to be a gynecologist, so she wanted to focus her project on the reproductive process, and the effects that oxidative stress like smoking or alcohol consumption may have on fertility.

“I had four generations of fruit flies over the span of the five months and I just kept collecting the population data, but my final conclusion was that there was no strong correlation between the hydrogen peroxide and a fertility decrease,” Hoffman said.

Johnston’s project focused on finding an alternative to nitrogenous waste in synthetic fertilizers, through the use of isopods. “I tried to grow a few different kinds of plants and I measured the nutrient content to see if it could kind of stack up to our fertilized soil by comparison,” he said.

Johnston found that the results varied greatly between the different kinds of plants, though the Porcellio scaber (otherwise known as the common rough woodlouse) was able to fertilize the first few inches of soil.

Science Teacher Cliff Lankheit was also recognized with the SoutheastHEALTH Teacher Award for his 45 years of educating students and 40 years of participating in the regional science fair.