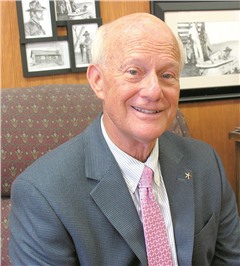 The year was 1987. Ronald Reagan was president. “The Simpsons” appeared for the first time on TV. Three Men and a Baby, Fatal Attraction, Stakeout and Dirty Dancing were playing in theaters. Michael Jackson’s “Bad” album and single were popular. And Dr. T. Wayne Lewis was elected to the Jackson R-2 School Board for the first time.

When Lewis was elected, Jackson R-2 had a different look. JHS students walked outside among three buildings on their campus (later known as “A,” “B”  and “the old Gym”). Three current elementary schools (Orchard Drive, South and East) did not exist, and three other schools (West Lane, North Elementary and the junior high) were much smaller than they are today.

What prompted this Jackson dentist to throw his hat in the ring for the first time?

“Sometime in the fall of 1986 two mentors asked me to run for the School Board,” Lewis recalled. Those mentors were Dr. Frank Wiley, Jackson R-2 superintendent, and Richard Davis, a banker. They were friends of Lewis and respected members of the community.

At first, Lewis balked at the idea. “I felt that I was too busy. Four of Linda’s and my children were still in school, and Chris had graduated two years before.”

However, the words of Wiley and Davis kept running through his mind, and after discussing the idea with Linda, Lewis filed for the School Board’s April 1987 election.

Lewis’ father, who had served on a school board himself, asked, “Why do you want to do that? All you are going to do is get your feelings hurt.” His father’s school board had purchased land, and it caused hard feelings in that school district.

Lewis didn’t worry about his feelings. “I look at the will of the people,” he said.

During his first campaign, Lewis chose the theme, “Quality and Progress.” He has used the same slogan for 30 years.

Election day 1987 came. When the polls closed and the votes were being tallied, Lewis was found in bed. Dennis Sievers called him and asked, “How come you’re not up here counting the tally?” That thought had never crossed Lewis’ mind. “I thought I’d read it in the paper the next day,” he said.

The election was close. “I had slipped in by 11 votes,” Lewis said. That was the only time in 10 elections that he was surprised by the results.

“During those 30 years I have had the opportunity and pleasure to work with five excellent and forward-thinking school superintendents and all of the dedicated staff members of Jackson R-2—and I cannot leave out the expectations of everyone in the District community.”

Right away there was controversy facing Lewis.

“Yogi Berra said, ‘When you come to a fork in the road — take it.’ Well, in 1987 we were at that fork. Jackson was beginning to show a faster growth than years past and we needed to decide the road to take,” Lewis recalled.

Some people wanted to build a brand new one-floor high school at a new location. Others wanted to start adding more rooms for elementary students, because that was where the largest bubble of growth was. A third push was to provide additional capacity for girls sports programs, which were becoming popular.

“So at that time we did them all in what we called the ‘Three Point Building Program,’” Lewis said. The Board decided to build Orchard Elementary and a multipurpose gymnasium at the high school, and remodel the Central Elementary Building for high school use.

“From there on we have been involved in building programs, and what you see around you when you look at where we were in 1987 and where we are now in 2017 is truly amazing — and we are still overcrowded.

“The need for new buildings, remodeling and expansion of staff will be going on from now on—that is a nice problem to have to pursue,” he said.

Each of Jackson’s superintendents had different gifts and Lewis was happy with them all. “Each one has been the right one for the right time.”

Sometimes things on the School Board went smoothly and sometimes they didn’t. When things go well, it may seem like the Board is “rubber stamping” everything, but that’s not true. “You may have your differences (among Board members) but you make it look smooth,” Lewis said.

There have been a few difficult years when Board members didn’t get along well. “I don’t look at them as bad years,” Lewis said. These years were learning times. “When you’re coasting, you’re going to miss something.”

Looking back over the years, Lewis is happy with the decisions the Board has made. “It seems like we made a lot of right decisions.”

Lewis was not always on the majority side of every decision. “There have been difficult times when we were butting heads and I was not sure what the result would be. When you find you’re not in the majority on the thinking, you pray, ‘God, let me know how I’m supposed to handle it.’ You let go and let God. And it all worked out.

“What I’ve always enjoyed is to find out yours is not the only opinion. You need to listen and compromise if necessary,” he said.

As Lewis became the “old man” on the Board, he found he was sometimes reluctant to speak up. “I felt reluctant to say something — we’ve tried this before — I got tired of repeating myself. I didn’t want to be the person who said, ‘Do it this way; we did it this way 25 years ago.’”

Inviting students and staff to Board meetings to give presentations has made the meetings a lot more fun.

“The rewarding times of being on the School Board almost all relate to the kids. Some of the highlights of the meetings are the presentations by students and teachers of the many facets of the school system. Everything from elementary children presenting new ways they are excited about learning; the recognition and awards received in the music department, athletics, extracurricular activities, cafeteria, transportation and on and on. This District excels in so many areas.

“We started these opening presentations during Wayne Maupin’s time because the meetings seemed to look mundane to a visitor coming to the meeting. So we started having individuals or groups present and it has really taken off.

“Now there are many wonderful reasons why a patron would come for the first 45 minutes of the meeting and walk away feeling proud of all the many achievements the District accomplishes.

“Will I miss those Tuesday night meetings (and all of the other ones it took to make me knowledgeable)? The answer is Yes. This has been a great ride.

“I was just a minor part of the big picture, but I was surrounded by knowledgeable people who made my responsibility much easier. I took the job very seriously, knowing that I was only there because a majority of the people who voted put me in that position.”

But it was not all hard work and responsibility. “I look at it as a fun 30 years,” Lewis said, and then added, “a learning 30 years.”