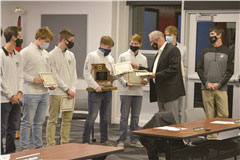 Jackson High School will switch from its current class rank system to a Latin honor system with three different levels of academic distinction. In addition, the school will transition from an 11.0 grading scale to a 4.0 scale.

The new honors system will be able to honor around 100 students, instead of the current class rank system where the top 10 percent, or around 36 students, are recognized.

The Jackson R-2 School Board unanimously approved the high school’s proposal during its regular School Board meeting on Jan. 12.

Jackson High School Assistant Principal Travis Wilson said students will have to have an “A” grade average to be recognized, and if the honors system was in place for the Class of 2020, only seven students would have received the highest honor.

“I’m not an ‘everyone gets a trophy’ kind of guy,” Wilson said. “If anything, I firmly believe that we need to recognize excellence, and I don’t think we are doing that to the best of our ability.”

Wilson said those graduates who currently make it just outside of the top 10 percent are losing out on college admittances and scholarships due to their class rank.

“We feel there is going to be an increase in scholarship opportunities, which will hopefully put money in our kids’ pockets and their family’s pockets to help them with their post-secondary schooling,” Wilson said.

Counselor Charon Shy said several JHS students and graduates have lost out on scholarships or been put on academic probation at their university because of a low class rank, even when their GPA and ACT scores are higher than other applicants.

Shy added that many of the students who don’t make the top ten are straight “A” students who would be in the top 10 if they were from other schools. “Our number 25 is higher than some schools’ number one,” Shy said.

The school will still be able to calculate student’s class rank for scholarship purposes upon request, but class rank will no longer be included on student’s transcripts.

The new system allows all students with a high GPA to be recognized, no matter how well their classmates do. JHS math teacher Kerrie Middleton said she currently dreads when report cards come out, not because her students received bad grades, but because the students worry about their class rank.

“Last year, I had a junior in precalculus talk to me about his schedule for next year,” Middleton said. “He wanted to take Accounting 2 and said accounting is the only class he loves, but he was worried that by not taking all the AP or all the extra weighted [classes] that he would drop out of that top 10 percent.”

The Latin honors recognition will start next school year for all students. Freshmen and sophomores will also switch to a 4.0 grading scale, while juniors and seniors will remain on the 11.0 scale throughout their high school career.

In addition, students would not receive Latin honors without having 90 percent attendance or higher. An appeals process will be in place for absences due to medical reasons.

Principle Seth Harrell said the school is also going to reevaluate its weighted classes with the switch to a 4.0 grading scale and focus on weighting only the most rigorous classes at the school. Classes will be either non-weighted, weighted plus 0.333 or weighted plus 0.667.

“By eliminating the number of weighted classes, students are still going to have an opportunity to increase their GPA, but they are going to have a little bit more flexibility in their schedule to take the classes they want.”

Superintendent Dr. John Link said he hopes the change will also help students’ emotional well being. “Aside from scholarship money, this is going to allow a kid to say ‘I don’t need to take 60 hours of college credit – maybe I can take 30 hours and now I can be a part of the chess club or be in choir,’” Link said.

Wilson said the process to change to the Latin honors program has lasted several years, with the school receiving input from students, staff and a parent focus group.

Similarly sized schools in the state, including those in Rockwood School District and Wentzville School District have already made these changes. In addition, area schools including Saxony Lutheran High School, Notre Dame High School and Perryville High School have also moved to a Latin honor system. “It seems like we are a little bit behind on it,” Wilson said. “We are certainly not the front-runners.”

• Dr. Scott Smith, who was selected this past month as the new superintendent for the District starting next school year, was introduced at the Board meeting.

“I am very excited about this opportunity,” Smith said. “I feel like it’s going to be a great fit for myself, as well as the District. Thank you for entrusting me, and I look forward to continuing to build these relationships and getting moved here before too long.”

Smith is currently the superintendent of the Glasconade County R-1 School District in Hermann, and has 23 years of educational experience. He met with the District’s administrative staff and school principals the day of the Board meeting.

“This is going to be a very smooth transition,” Link said. “It’s not going to be awkward. He and I know each other well enough that my job is to make sure he knows everything I know and then some.”

• The Board extended emergency sick leave and emergency family medical leave related to COVID-19 through the end of the 2020-2021 school year. The resolution allows District employees to continue to have up to two weeks of leave due to COVID-19. Employees will receive their full rate of pay during a leave due to having COVID-19 or being quarantined by a health care provider or a local health department.

Link explained that the federally required COVID-19 leave expired at the end of 2020, but could be extended by individual school districts. He said the extension is exactly the same as what was offered in the fall semester.

• The Board recognized the Jackson High School cross country team, who had advanced to the state championship. It was the first time in six years that both the boys and girls team advanced to state. The boys team placed ninth overall in state, while the girls team placed 13th overall.

In addition to the team’s academic success, Link congratulated the team for their character. Link said he received an e-mail from a man who met up with the team at a restaurant. The team allowed this man to go to the front of the line and order his food, so he could go back to his wife in the hospital.

“He sent me an e-mail just telling me how proud he was and that we should be proud of you all as well,” Link said. “Getting to state is awesome, but doing things for others who you don’t even know is better. Thank you all for your character and what you’ve done for us.”

Coach Zack Walton said the team went into the season with the mindset that they could beat any team in the state. “We were definitely the underdogs,” he said. “I think our kids understood a little bit of that, but also knew we could win.”

“I wish I could say thank you to the entire community and all of our parents at once, because obviously without any of them getting us into this when we were younger and letting us travel all over the place to play soccer, it wouldn’t be possible,” Reiminger said.

• The Board recognized members of the Jackson High School football team for winning its first-ever state title. The team won the Class 5 State Championship this fall. Head coach Brent Eckley brought members of the team’s leadership council to the board meeting.

Twenty members of the football team serve on the leadership council. Eckley said these students have to apply and be interviewed to get onto the council. Once chosen, they help the coaches with communication to their group of players in their locker bay.

“These guys helped do attendance, which they had already done, but they also helped us track temperatures,” Eckley said. “For us to do 102 guys’ temperatures and attendance, some days it was only five minutes because of what these guys were doing.”

After all three athletic teams were recognized, Board President Kelly Waller remarked, “We just introduced more state champs than most schools do in five or 10 years.”

• Students from Orchard Drive Elementary School and the Jackson CTA thanked the School Board members in honor of School Board Appreciation Month. Orchard Drive Elementary School teachers and students created a video thanking the Board members and a few Orchard students came to the Board meeting to give each Board member a painting that featured student’s fingerprints. Jackson CTA representative Charon Shy gave each Board member gift cards and thanked them for all the work they have done for the District.