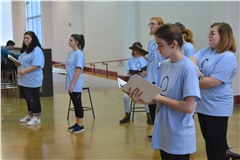 Jackson High School drama students have been preparing a spring play that will consist of a reader’s theater performance of “Project Semicolon” and an ’80s throwback one-act play called That’s Not How I Remember It.

Project Semicolon is a mental health nonprofit organization that focuses on suicide awareness and prevention. The reader’s theater production is using passages from the book, Project Semicolon: Your Story Isn’t Over. The book is a collection of stories written by people struggling with mental illness.

Eight students read and perform different passages from the book, each interpreting a real-life person’s story from the book. The passages deal with depression, being bullied for their weight, self-hate, abusive parents, eating disorders, gender roles and suicidal thoughts.

A theme that goes through many of the stories is that they go through these issues while they are seen as happy, bubbly and the rock of their family. Several members of the cast said the show is able to provide an honest, and ultimately hopeful, look at mental illness.

“Playing a person who has these mental disorders makes it harder to look at someone that has them in real life and think that you can’t relate to them,” Reyt Middleton said.

The theme of the show is to never lose hope. One story, told by Sammie Mansfield, states, “You’re still a superhero, even if the only person you ever save is yourself.”

A cast of 14 will perform the one-act play, That’s Not How I Remember It. The show centers on a couple, played by Melody Sievers and Neal Harrison, telling their child the story of how they met in 1986.

However, they both remember their meeting very differently. The mom views their meeting as if it came out of a John Hughes romantic comedy, and the dad views it as a Karate-Kid-like battle with the mom’s ex-boyfriend.

“It’s really cool being able to play the same character, but in a completely different light depending on whose version of the story we are in,” Mayfield-Wubbena said. “When I first walk out, I’m the cool guy, but then as soon as the mom starts talking, I’m a shy weirdo. I’ve never been in anything else like it.”

Henry added that she gets to play both a woman’s perspective of herself and how a man sees her. She goes back and forth playing a damsel in distress with “not a lot of thought” and a complicated woman who feels like an outcast.

The show is full of ’80s references and over-the-top characters, but the cast said it’s still able to find something real about the central relationship of the show and why they fell in love.

“Memories, when you look back at them, are very dramatized,” Henry said. “We heighten them to continue to remember them, so since we are seeing a memory, we see the most exaggerated version of what happened.”

Tickets are $5 and can be purchased at the high school before the show.