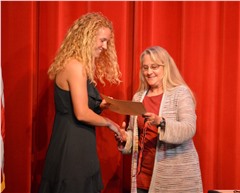 Jackson High School celebrated the academic achievements of students at an awards ceremony on Wednesday, May 1, in the high school auditorium. Several athletic awards were also presented.

The English department gave the writing award to William Ward and the English award to Ashlynn Henry. Amber Doze received the French award and Emily Scott received the Spanish award.

Mikala Liley and Will Ward were also honored for their work as student body president and vice president, respectively.