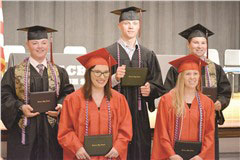 Jackson High School held a military recognition ceremony on Friday, May 22, to honor five graduates that are joining the military. Several of these students will be in basic training before the school’s regular graduation ceremony on June 19.

The graduates wore a red, white and blue honor cord, which is given to students who have enlisted in the armed services each year. The ceremony was held at 6 p.m. in the Jackson High School Auditorium, with only immediate family members invited.

Assistant Principal Travis Wilson stated that this graduation was probably the smallest in the school’s history. “Truth be told, I don’t even know if a [graduation] ceremony has ever been held in this auditorium,” Wilson said.

Each graduate was able to receive his or her diploma from Board of Education President Kelly Waller and hear a commencement speech from Dr. William Lewis, a business teacher at the high school and former United States Army officer.

Lewis, who was deployed twice to Iraq and twice to Afghanistan, talked to the graduates about the duty to do what is right, honorable conduct and love of country. He commended the graduates for volunteering to be a part of the armed services, saying these individuals have dedicated their lives to a higher purpose.

He said that he treasured his time in the service and the sense of purpose that it gave him. Lewis advised the five to never give up during the hard times and to help those around them.