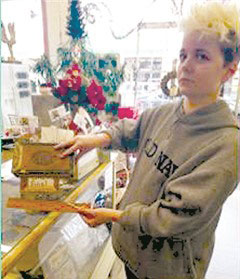 Jackson High School freshmen were able to find their passion through an independent-study research assignment called Passion Project in their English Language Arts class. Students were asked to create something related to their interests or serve their community in some way.

The projects varied greatly, but students had to write a research paper on their topic and give a presentation after they completed their Passion Project. ELA Teacher Ashley Raney said this was the second year for the assignment, and it was created to have the students care about their research topic.

“Our research project used to be about Shakespeare, and they would just do it for a grade and be done with it,” Raney said “With this project they get to choose the topic, so they care more during the research aspect and feel more comfortable when they are presenting.”

Delaynie Spies chose to do her project on building a ukulele out of a cigar box. Spies, who played guitar for six years and has experience playing several other instruments, spent several months putting the ukulele together.

The cigar box was found in an antique store, and a disused ukulele neck and hardware for the ukulele was donated by Jackson Audio & Music Supply. Spies said the hardest part was getting the strings to stay in the body without detuning and finding a tuning peg that went missing during the process.

“I’ve been thinking of taking it with me on trips, as I like to play on the beach,” Spies said. “But I also think I may take it to other kids, like neighbors, family, tutors – to show a little more about homemade instruments and connecting with music.”

Spies wasn’t the only one to create a product for the assignment. Out of the 359 projects, 101 students made a piece of art, an invention or completed a craft. Gavin Penrod built a working vending machine, Alex Lewis designed a board game called Storming the Castle and Laine Heick created an animated short.

“I had one student [Drake Geringer] build a wooden baseball bat,” Raney said. “Some don’t realize how much math is involved, but during his presentation he talked about the measurements he had to take. You could tell that these kids were knowledgeable because of their research and then they got to apply the research that they learned.”

An additional 78 students learned a new skill, including Kalie Letner who learned to sew and Abby Coomer who studied American Sign Language. The students could also choose to use their passion project to do job research and shadowing. Parker Craiglow, who was one of 60 students to do job shadowing, followed a logger and documented his experience through videos.

Other students used the project to help their community, including 15 students who created proposals on how to improved Jackson High School. Abby Klund made new student gift bags that included Jackson t-shirts, an activity pass and information on the different clubs and activities.

“You can tell that Jackson students have a really big heart,” Raney said. “They got to choose any topic that they wanted and we had over 100 students choose something that involved helping others.”

Sixty students raised money or donated items to charity, 32 volunteered and 13 were involved in a community group for their project.

Zoe Bollinger made and sold Christmas ornaments and small paintings to raise money for missionaries, and Reed Broussard raised $120 for St. Jude Children’s Research Hospital by streaming himself playing video games on Twitch.

Jacie Pattengill and Caleb Farmer hosted a golf tournament to raise money for the Special Olympics, Ryley Guth volunteered during the Night to Shine dance for special-needs teens at St. Paul Lutheran Church and Keeley Fitzpatrick knit 50 hats for newborns and donated them to Southeast Hospital.

“Out of our passion projects, I know many of us got a strong appreciation for people in our fields of interest,” Spies said, adding that “equally as many got a huge weight off of their shoulders after finishing.”

Raney said several of the students have told her that they plan on continuing with what they studied for the assignment. She said that for the students who chose to get involved with the community, it “sparked or ignited something in them” and helped them realized that helping people is a good thing.