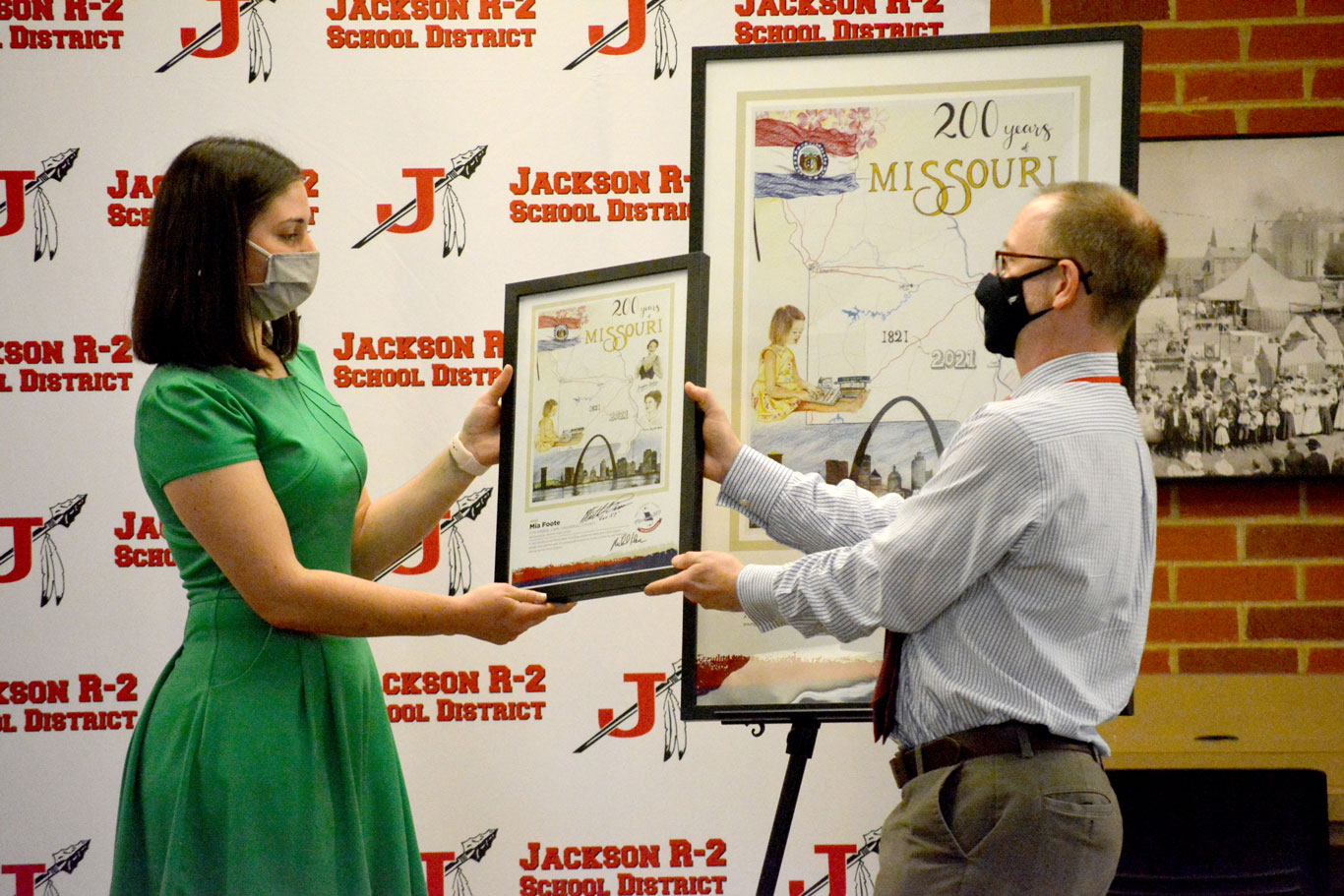 Mia Foote, a junior at Jackson High School, was honored on March 23 for her winning entry in the official Missouri Bicentennial Poster contest.

She was one of four finalists chosen for the contest, which was open to all Missouri students in third to 12th grade.

The poster was completely hand-drawn by Foote, including a map of Missouri featuring the state’s major roadways and rivers.

Her poster also featured influential Missourians such as Josephine Baker and Laura Ingalls Wilder through the eyes of a young girl inspired by books written by and featuring strong women from Missouri.

“The theme was the past, present and future of Missouri,” Foote said. She said the past was represented by the famous Missourian and state symbols like the flag and dogwood trees.

The present was shown with the skyline of St. Louis.

Foote said she wanted to show the strength of women in her poster. “Of course there are tons of famous men, but sometimes women aren’t as recognized and I wanted to bring them into the spotlight.” she said.

He added that the contest was a way for the bicentennial commission to engage with students and get them thinking about Missouri’s past, present and future.

Foote said the poster took about a month to create, including research on Missouri’s state symbols and history.

Foote said she is excited to participate in local bicentennial events, including an ice cream social planned for August. “I’m really looking forward to that and celebrating how far we’ve come as a state,” she said.

Lt. Gov. Mike Kehoe, who was part of the selection committee for the contest, sent a video congratulating Foote on her winning poster. He said her design was chosen because of its aesthetic quality, consideration of geographic and cultural diversity, originality and its interpretation of the contest theme.

“By entering the poster contest, you have also become an important part of the celebration of Missouri’s 200th birthday,” Kehoe said. He also thanked her for “your wonderful design that will become one of the iconic images of 2021.”

Bill Eddleman from the State Historical Society of Missouri’s Cape Girardeau research center said he was delighted to have a winner from the area because “Southeast Missouri was instrumental in the struggle for Missouri statehood.”

Jackson Mayor Dwain Hahs also congratulated Foote for her achievement, saying it was “great honor to have this right here in our own city.”

“We are excited about the 200th year of Missouri,” Hahs said. “It is just getting started, but I think this is a fantastic beginning and it really kicks off the bicentennial in our city to have such a prestigious award.”