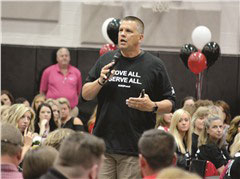 Dr. John Link, who has served as superintendent at Jackson R-2 School District since 2015, announced his intent to retire effective June 30, 2021, during the Jackson R-2 Board of Education meeting on Oct. 13.

“It was an extremely hard decision to retire, but after a very successful career in education, I am excited to focus on my family and I am anxiously awaiting the arrival of my first grandchild in late October,” Link said. “It has been an honor to serve the students, staff, teachers, parents and community members of Jackson.”

Link has served in education for 32 years, 19 as a superintendent. June 30 will complete his sixth year at Jackson R-2. Link has stated he has plans to stay in the Jackson area and enjoy retirement.

“The Board of Education extends its appreciation to Dr. Link for his six years of service at Jackson R-2,” Board of Education President Kelly Waller said. “Our District has made some tremendous strides in many areas such as technology and facilities expansion under his leadership.”

During Link’s time at Jackson, the District has seen an increase in enrollment by nearly 1,000 students and the implementation of the One 4 One program, giving each student a computer tablet.

The District has seen remodels and additions at Jackson High School, Jackson Middle School, West Lane Elementary School and North Elementary School through the $24 million Proposition J bond issue. Link also oversaw remodeling of the AIT and C buildings at JHS, as well as the purchase of property in Old Orchard for a future expansion.

During Link’s time at Jackson, the District has increased school resource officer presence from one to five officers in a collaborative effort with the City of Jackson. He also worked with the City on baseball and softball field upgrades.

Link said he has no plans to slow down between now and the end of the school year – with an expansion at the R.O. Hawkins Junior High School ongoing and the District virtual instruction program Ignite Online soon to finish its first semester.

• Link said the District has had zero COVID-19 spread at school. Every positive case for students and employees has been traced to exposures outside of school. At the time of the meeting, the District had two positive student cases and four positive staff member cases.

“Everybody is doing their due diligence to make sure we keep everyone safe.” Link said the change in the secondary school schedules, where students have longer block classes and attend half their classes each day, has resulted in lower discipline issues than usual.

“I’ve not had one long-term suspension request,” Link said. He guessed that the decrease in discipline issues is because students are going straight to classes in the morning and are spending less time in the hallways. “It’s a collegiate trust environment,” Link added.

At the elementary level, Link said they have been lucky. The few elementary students who have tested positive have happened to be in classrooms where their teacher had them wearing masks.

“The kids are so amazing. We really thought we’d have an issue with kids and the mask would become a political statement, but no one is having that issue,” Link said.

• The Board set May 21 as the graduation date for the Jackson High School Class of 2021. Link said the day is the Friday before school is scheduled to end for the year. He added that the high school has already contacted the Show-Me Center at Southeast Missouri State University to hold the event.

Several polices related to transfers were also edited to comply with House Bill 604. The enrollment policy was also edited to comply with 2019’s Senate Bill 306, which requires districts to allow remote registration of students who are moving to Missouri due to relocation under military orders. “Because of COVID, we have enrolled so many kids electronically that this will not be a concern,” Associate Superintendent Jessica Maxwell said.

Changes to the student discipline policy were approved by the Board, removing references to secluding students as a disciplinary action. Seclusion is never used for disciplinary reasons. Maxwell said the subject of seclusion is addressed further in another policy.

The Board approved edits to the employee alcohol and drug testing policy. The change expands the policy to allow for drug testing of all employees, not just transportation employees, when the District has reasonable suspicion to do so. The policy also outlines specific testing required for operators of commercial motor vehicles.

The Board edited the taxing and borrowing policy by removing specific examples of when the District can use a bond and now says the Board will follow the boundaries of permissible uses stated in each specific bond resolution adopted by the board.

The purchasing policy was edited to be more consistent with the District’s procedure. It now states that the Board must vote on all contracts over $100,000 and no bills will be paid without proper documentation.

The graduation requirement policy had a small wording change to specify that students may only fulfill one credit of any mathematics, science or practical arts unit with an approved computer science course.

• The District was found to meet the requirements in implementing the Individuals with Disabilities Education Act (IDEA). The Board approved the special education compliance plan, as they are required to do every three years.

The District received the highest score in every area scored. The District also received a file review that received 99.33 percent. Maxwell said the only thing the District was critiqued on in the file review was an evaluation where the District did not require a student to indicate the student’s preferred career path. She said the student did not know at the time of entering high school what he wanted to do as a career.

Out of the 5,521 students currently enrolled in the District, 726 students have an individualized education program (IEP) and are part of the special education program in some way. Maxwell said having 13 percent of students with an IEP is consistent with state guidelines.

• The Jackson Junior High School Coding Club presented to the Board. Students Trent Schorey and Owen Masters showed their award-winning coding project from last year to the Board.

The students said the club provides various lesson plans to learn how to code before they are able to split up into teams and create a project to compete for prizes.

Schorey and Masters received the community favorite award last year and won $750 with their teammate Grant Spark. The pair demonstrated their game “Gladiator,” and the various buttons, characters, backgrounds and movements they coded themselves.

The coding club receives lesson plans and participates in competitions organized by Codefi, a technology-focused company in Cape Girardeau. Jackson is one of around 10-15 schools in the area that participate with coding clubs; with additional schools joining every year. Both the junior high and the middle school have clubs and are able to compete.

The junior high club is now in its second year and has between 20-30 students. Since the lessons are Web-based, 10 students are able to participate from home.

• The Board recognized staff members who retired last year. Due to COVID-19, the District was unable to hold its end of the year recognition for retiring staff members.

The three former employees who had been with the District the longest were able to attend the Board meeting and were given a special thank you.

Raymond Peats, a language arts teacher at the junior high who has been with the District for 35 years, retired prior to this school year due to COVID-19 health concerns.

“Out of everybody I’ve ever had as a principal, there’s only one person that everybody who comes back as either an adult or a young adult likes to see – and that’s Ray Peats,” Crosnoe said.

Donna Eakens, a former food service worker at the junior high, was also recognized for her 35 years in the District. Crosnoe mentioned how the food service work has changed over the years Eakens has been at the school and how she has impacted the District. It was estimated that she had served almost 3 million meals during her time in the district.

Kenny Mirly, who served as a bus driver for the District since the late ’60s, said he got the job right after graduating high school. Mirly added that in his 50 years as a bus driver, “I never had an accident that was my fault.”