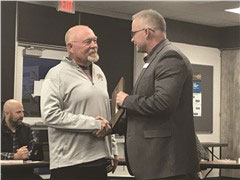 The Jackson R-2 School Board discussed getting a new District website by next school year at its regular Board meeting on March 12. The current site is going into its fourth year of use, according to Director of Communications Merideth Pobst.

“Websites don’t last longer than about three years without having to do some type of upgrade, so we are looking at getting a new website,” Pobst said. She added that with the new site, a custom app will also be launched.

The app will tie into the current school messenger system that contacts parents by phone or email in the event of school cancellations or early dismissals. “Any time you can over-communicate with the public and with parents, that’s a good thing,” Pobst said.

The new website will be more user-friendly and mobile responsive. Pobst said they hope to have the new site up by the time school starts next fall.

• The Board approved a library program evaluation, with Associate Superintendent Matt Lacy saying the District’s libraries have done a tremendous job in shifting their focus over the last few years to incorporate technology.

“It’s more than just books, but books are integral to what we want our kids to develop a passion for,” Lacy said. Over 110,000 books and other items are checked out each year at the elementary schools, with an additional 64,000 items checked out at the secondary schools.

The elementary libraries provide keyboarding lessons to students in second, third and fourth grade. At the middle school, Makerspace and library leader classes are held daily, with ELA classes held monthly in the library.

“Librarians are tech leaders, they are leaders on literacy in our District and they are an invaluable part of what we do,” Lacy said.

• The District will work with an energy consultant to see if there is a way to offset high utility costs. The energy analysis is free on the front end, and the consultant group would potentially help the District obtain more energy-efficient equipment.

Superintendent John Link said the District might be able to make improvements with automatic lights and controlling HVAC units when the buildings are empty. The District paid a $99,000 utility bill from the City of Jackson during the Board meeting.

• Jackson Reads is scheduled for 5:30-7 p.m. on Wednesday, April 10, on the courthouse lawn in Jackson. The third-annual event allows families to bring books to read outside with others in the community. Attendees are advised to bring blankets or lawn chairs to sit on. There will be a book swap for people to trade books they’ve already read and guest readers will be in attendance. Snacks will be provided by Southern Bank and several food trucks will also be present.

In the event of inclement weather, the free event will be moved to the Jackson Middle School Gym.

• The foundation received a grant from Walmart. As part of the grant, the District received drones and 360-degree cameras. Instructional facilitators, in collaboration with teachers throughout the District, will use the equipment.

• The Board recognized Dan Stover, who finished his 12th year on the School Board during the meeting. Stover, who decided to retire from the Board, was the longest tenured Board member currently serving.

He was a 1970 graduate of Jackson High School and taught at Jackson schools for 27 years. Stover also has served as the “voice of the Indians” at Jackson football and basketball games since 1994.

“When you put it all together, including the time Dan went to school here, he has been in this school or working for this school for 55 years,” Board President Kelly Waller said.

Since 1973, Stover has been to almost every Jackson football game, home or away. In the past 46 years, he has only missed one game due to his father’s passing. “One time in 46 years – that’s dedication to Jackson,” Waller said.

Stover said he has been proud to be a part of the School District and is not leaving forever. “I’ll be back,” he said. “Maybe I’ll even substitute a little bit.”

• Five Jackson wrestling students were recognized at the meeting. Riley Wiseman, Alec Bailey, Cole Amelunke, Garner Horman and Braden Vaugier were state qualifiers and competed in the Class 4 State Championship Meet in February. Jackson finished 12th at state, and 10 members of the team will be seniors next year.

• The Jackson High School cheerleading team was recognized for winning their state competition, something that had never before happened in the program’s history. The team put together a competition squad last May and put together its competition routines on top of their sideline cheers. The team will start tryouts for next year’s season in April.

• Jackson Middle School students showed their Makerspace projects to the Board, including a cardboard city and interactive posters. The library at the middle school has a special Maker-space area, where students can make crafts and inventions using a variety of materials.

An elective Makerspace class has been created for fifth graders, taught by Librarian Jenn Miller and Industrial Technology Teacher Jennifer Parker. Miller said the students are able to take on long-term projects over the quarter.

• Students from Erica Cooper’s third grade class at West Lane Elementary School spoke to the Board about their student-led conferences. The students were in charge of tracking their learning and identifying their own strengths and weaknesses. The students then took the teacher’s role during what is traditionally a parent-teacher conference.

Students Hunter Mattson and Sarah Petzoldt spoke about the conference, saying they were nervous when they first heard about leading the conference, but had fun when they eventually showed their presentation to their parents.

Cooper said the feedback she has received from both students and parents have been overwhelmingly positive. She added that students left the conferences feeling proud of themselves for what they accomplished.