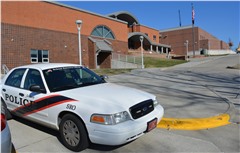 A month after the school shooting at Marjory Stoneman Douglas High School in Parkland, FL, the Jackson R-2 School District has taken multiple steps to improve safety at its schools.

“One of the things that we do on a normal basis is review our safety protocols,” Superintendent John Link said. “Every time we have some type of critical incident in the country, we take a look at what we’re doing.”

The District reviews if any safety protocols needs to be adjusted or if they are sufficiently prepared for such an attack. Link said there are times when they find nothing to change, but this review has led to enhancing their safety precautions.

The two open entry ways at the high school are now manned during the day. Link said the new adjustment will make sure no one comes into the building without signing in. He added that the high school couldn’t be completely locked down like the other schools, because it is a mobile campus.

“Throughout the day, we have kids going to the vocational agriculture building or the old gym or to the elementary schools to tutor,” Link said. “It’s just hard to lock down that building.”

The District is also rolling out a CrisisGo app that allows teachers and administrators to access all the District’s crisis plans from a smartphone, tablet or computer. Link added that it will also be shared with the Jackson police and fire departments.

“Not only will it be incredible for our school, but for our first responders coming in,” Link said. “We can communicate with them before they get here and speed that process up.”

The app contains a panic button, maps of the buildings, student information and checklists for what to do in various situation. The app can also send school-wide messages during the crisis. Link said it will be useful if a student goes to the bathroom before a lock-down occurs. With the app, all teachers and administrators could know who is missing and alert each other when they are found.

“It’s been somewhat of a lengthy of a roll-out because with 5,000 students and 700 employees, we want to make sure we have all the information correct before we roll it out,” Link said.

Merideth Pobst, the director of communications for the District, said the student information will allow teachers and administrators to easily contact parents in the case of an emergency. This would apply to incidents at the schools, as well as during field trips.

“Next year, after we feel confident using this app ourselves, we can introduce it to students and staff,” Pobst said. “If we choose to go external with the app, we can introduce things like bullying awareness features and information like that.”

“If the city tax issue passes, we’re hoping one of the SROs will become the overall district safety coordinator for the District,” Link said.

“The social workers, more than anything, are the liaison between the family and the school,” Link said. They get deep down into what’s going on in the emotional state of the child, which allows us to make adjustments.”

All of the school resource officers and many of the District staff have been through active shooter training, either Stratego or ALICE training. Link said an ALICE trainer lives in Cape, so they plan on having more District employees go through that training.

“When you have roughly 500 to 700 staff members, you aren’t going to get them all trained, but you want to get several of them trained,” Link said.

Link said they have been hesitant to train students or give out too much information on the District’s active shooter plans, because they never know if that knowledge could be used against the school.

“One of the things that research will tell you is that a lot of times when there’s a school shooting, it is someone familiar with the school,” Link said. “Throughout these past few weeks, we’ve had a lot of folks who would like to know a lot more about what we do, and we’ve have to come to grips with how much information we want put out there.”

While many teachers have been through active shooter training, all teachers in the District have been trained for intruder drills. Link said the hope is that if a situation were to occur, teachers will take the lead and students will follow.

“We feel very confident that we have a safe school, but we don’t feel confident that it could never happen here,” Link said. “Every time you say that, it does.”

He added that schools are one of the safer targets of recent mass shooting, with more security than malls or movie theaters. But with safety being the District’s top priority, Link said it’s important to be on the forefront.

“I think we live in a world nowadays where you have to always be aware of your surroundings, and I think our folks do a great job,” Link said.